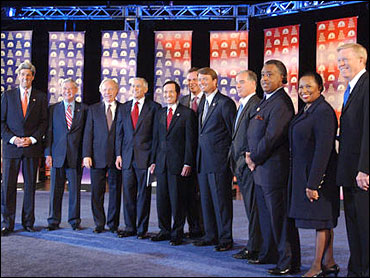 
It was debate week in politics and, frankly, I enjoyed both of them. If it accomplished nothing else, the California set-to reminded all of us of that old truth: Be careful what you wish for. Californians wanted a recall election, and, boy, have they got one. But as they say in Hollywood, that's entertainment.

And with sequels so big now in Hollywood, there's another plus. If they ever remake "The Odd Couple," the casting will be easy. Who now but Arnold in the Walter Matthau role and Arianna as the persnickety Felix?

As for that run-in of the candidates for the Democratic presidential nomination, it showed the field is beginning to shake down.

Clearly the candidates themselves have now concluded the race is coming down to one of them and Howard Dean. Who'd have thought it? But why else would they all turn on him? New candidate Wesley Clark held his own, which was all he needed to do first time out, but he won't have it easy from here on. The rest made their early mistakes while no one was watching. He starts in the spotlight; no place to hide.

These days politics usually comes down to no more than who can raise the most money to make those nauseating TV commercials. Debates, though, are about the only vehicle left that can counter the power of those commercials, the last place we can actually watch candidates think on their feet.

So for all the silliness, the canned zingers, and the rehearsed `Gotcha!' lines, debates are valuable, and, for those of us of a certain age, about all that's left of the politics we used to know.