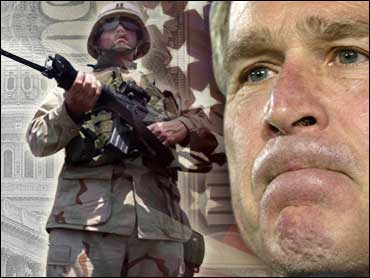 
The earth shook under the World Trade Center, the Pentagon and in rural Pennsylvania two years ago. Literally and tragically, the earth shook. Thousands of innocent civilians lost their lives as victims in a war they did not know they were part of and, for the country, another date and time of historical importance was seared in the collective memory of Americans.

The events of that day caused America's political leadership to draw a new red line for national security policymakers, concluding another such strike against the United States on its own territory must be prevented, no matter the cost in military, diplomatic or financial terms.

It goes without saying the politicians in charge, in this case the administration of President George W. Bush, realized that while America could survive another tragedy like 9/11 they could not.

And so a new mantra in Washington was adopted, the "war on terrorism" was declared by Mr. Bush and a new rationale for national security decision-making was put in place. "We will not wait for further attacks on innocent Americans," is the way President Bush put it commemorating the second anniversary of the attacks.

While most of the world sympathized with America as victim, when it came to the nitty-gritty political decision of joining the U. S., many of our allies made it clear they would not snap to attention and follow Washington's lead.

Washington moved to oust the Taliban and al Qaeda terrorists in Afghanistan, although it has not yet been able to kill or capture its number one target, Osama bin Laden.

Next came Saddam Hussein and Iraq. Despite staunch support from Tony Blair's government in London, the Bush administration was unable to get specific U.N.-mandated approval for the military effort to remove the Iraqi dictator from Baghdad, because of opposition from France, Russia and Germany.

President Bush moved anyway. He and other administration officials proclaimed the events of 9/11 could not be allowed to happen again, thus the need to rid the world of Saddam Hussein and his regime, which the Bush administration claimed had ties to al Qaeda. Along with the claim that Iraq had weapons of mass destruction, the possible connection of Iraqi ties to terrorists became justification enough for the Bush administration, even if it failed to offer sufficient proof to persuade much of the rest of the world.

The result has been a new policy of preemption by the world's only true superpower. "We're on the offensive against terror. We're determined to stop the enemy before it can strike our people," Mr. Bush says.

America can and has carried out its policies but one of the costs is a feeling in Europe that, to paraphrase one German foreign policy analyst, 'America goes in where it wants and makes a mess and then asks others to come in and clean it up.' Afghanistan is a case in point. American military power easily overthrew the Taliban, but, even after the investment of more than a billion dollars in aid to the American-backed government of Hamid Karzai in Kabul, Washington has persuaded NATO to come in and do the 'cleaning up.' Europeans see the same scenario unfolding now with Iraq.

After the events of 9/11, a legacy continues to build on both sides of the Atlantic. The Bush administration, determined now more than ever to root out terrorism anywhere and everywhere and no matter the cost, is inclined to follow its own instincts when it comes to how best to prevent another terrorist attack on America, letting the diplomatic chips fall where they may. In Europe, there is sympathy but also a feeling that the Bush administration's arrogance gets in the way of a more effective policy. But in Washington these days, trans-Atlantic relations are nowhere near the top of the casualty list.
By Charles Wolfson