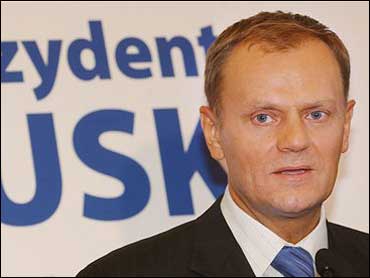 Polish presidential candidate Donald Tusk on Tuesday dismissed a report that his grandfather was believed to have volunteered for Nazi Germany's army during World War II.

An official from the campaign of Lech Kaczynski, Tusk's rival in an Oct. 23 runoff for the presidency, said after the first round of voting Sunday that there were rumors Tusk's grandfather volunteered for the Wehrmacht.

Jacek Kurski was quoted as saying in an interview with the Angora weekly, published Monday, that "certain sources in Pomerania are saying that Tusk's grandfather volunteered as a Wehrmacht soldier." Pomerania is the Baltic coast region from which Tusk's family comes.

"Both my grandfathers spent World War II in (Nazi) concentration camps. They both paid one of the highest prices in World War II: loss of freedom and loss of health," Tusk said at a televised news conference.

Nazi Germany began World War II with its invasion of Poland in 1939. During the next six years, it subjected the nation to a brutal occupation in which more than 6 million Poles died. Memories of the suffering have kept bitterness toward Germany alive even today.

In Sunday's first round of voting, the pro-business Tusk gained a narrow edge over Kaczynski, the conservative mayor of Warsaw, taking 36 percent of the vote. Kaczynski took 33 percent.