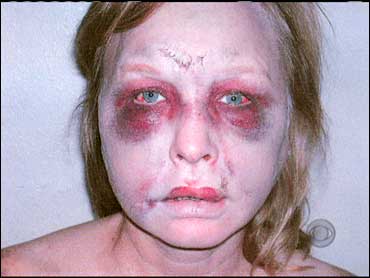 The Caddo Parish district attorney and the U.S. Justice Department will investigate the case of a woman who is seen in a police department video lying in a pool of blood in an interrogation room, police chief Henry Whitehorn said Wednesday.

Angela Garbarino of Mooringsport has said she was beaten after her Nov. 17 arrest on a drunk driving charge. The attorney for Wiley Willis, the police officer who was fired Feb. 5 in connection with the case, has said through his attorney that Garbarino fell.

Willis has had two lawsuits filed against him in 2006, one by a mother who says the officer put a gun to her son's head, another by a woman who says she was arrested because she filed a complaint against Willis, reports CBS News' Early Show correspondent Jeff Glor.

Excerpts from a police videotape show Garbarino struggling with an officer in the interrogation room. But the camera was turned off for a time. When it was turned back on, Garbarino is seen on the floor in a pool of blood.

"I had an opportunity to view the tape. I was outraged at what I observed," Whitehorn said at a news conference at police headquarters. "I immediately ordered an internal affairs investigation. That investigation determined that numerous policy violations had occurred."

Garbarino, 42, said Willis, 30, tried to force her to take a breath test against her will and that he beat her after turning off the camera.

Willis' lawyer, Eron Brainard, was not immediately available for comment when called Wednesday by The Associated Press. He told The (Shreveport) Times that Willis did not beat Garbarino.

"After her refusal to take the breath test, officer Willis turned off and saved the videotape in accordance with normal practice," Brainard said in a story published Wednesday. "The suspect again tried to leave the room. In the process of (Willis) stopping her, she fell and injured herself."

Paramedics took her to LSU Hospital in Shreveport, where she was treated for a broken nose, a fractured cheek bone and bruises on various parts of her body. Two of her teeth were knocked out.

"If somebody slips and falls, they may bruise their wrist. They don't have two black and blue eyes, missing teeth and found lying down in a pool of their own blood," says Bloom.

Shreveport's police chief says he is outraged by what he saw on the tape, which is why he fired Willis, reports Glor.

But Willis has not been charged with any crime.

The police union has also come to Willis's defense, saying that the chief didn't follow protocol and the police officer's rights were violated, reports Glor.

Garbarino had been taken into custody for DWI testing after someone saw her crash her vehicle into other cars in a casino parking garage and a light pole on a city street, according to police.

Whitehorn said it is police policy for an officer to turn off the videotape of a sobriety test when testing is over and the officer is preparing to book the offender.

Policy will now be changed to where two police officers are in the room at all times, authorities said.

"When the incident started to escalate, he should have called in another police officer. He could have cuffed her to the chair. He could have used less restrictive means to control the woman if, indeed, she was getting physically abusive," Bloom told The Early Show.