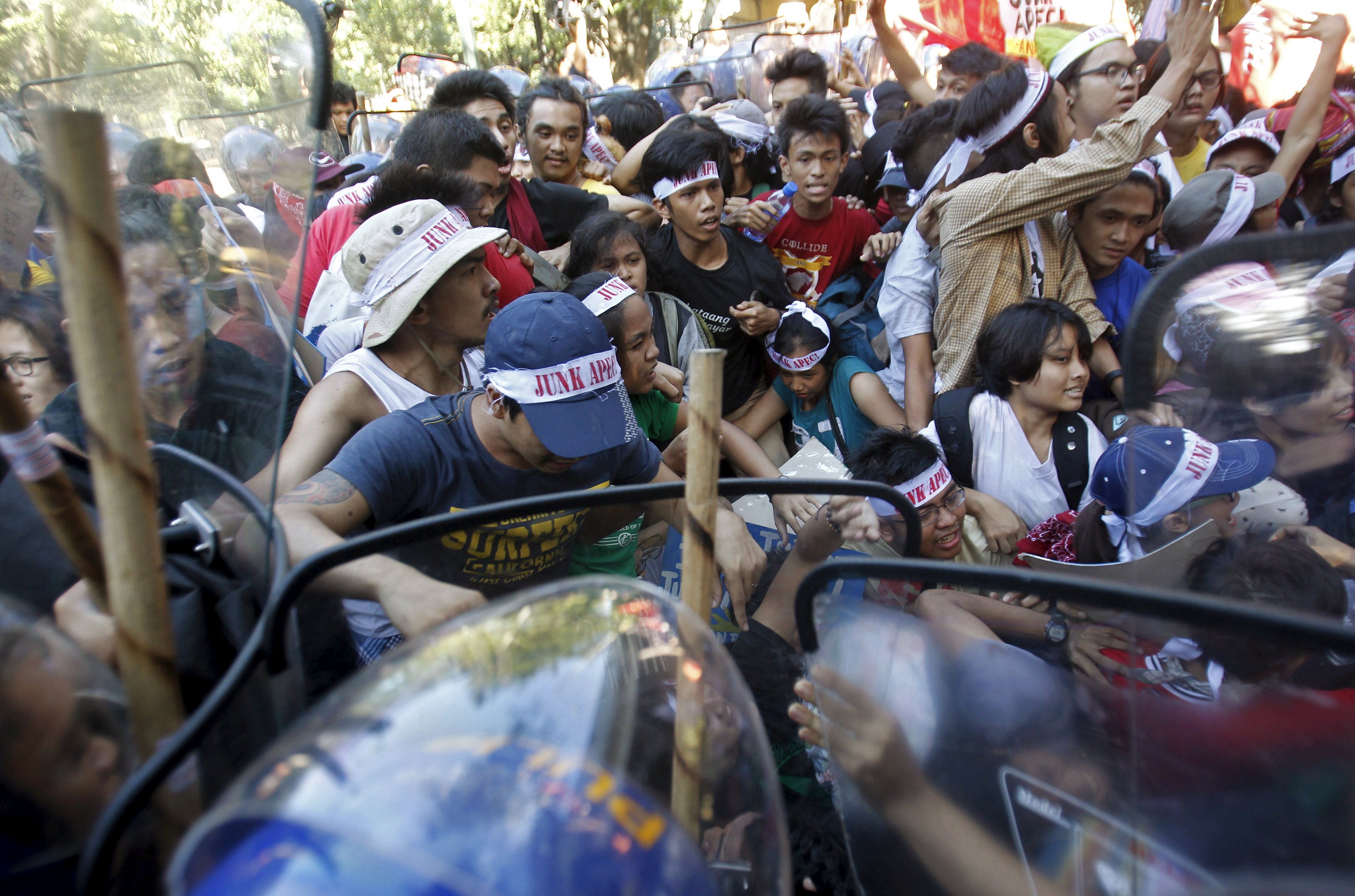 About 1,000 activists chanted and waved banners in a tussle with hundreds of riot police at security barricades on the fringes of the annual meetings. Police used water cannons and canes to try to disperse the crowd.

Protest leader Renato Reyes, of the left-wing alliance Bayan, said the group was demanding a new economic framework that puts national interest ahead of corporate profits.

Over the past two decades, "APEC and imperialist globalization have only benefited the rich countries while further impoverishing developing countries like the Philippines," he said.

The Asia-Pacific leaders at the meeting called for governments to urgently increase cooperation in the fight against terrorism, at talks overshadowed by the Paris attacks.

A copy of the declaration the leaders will issue following their talks, seen by The Associated Press, said they "strongly condemn all acts, methods, and practices of terrorism."

The statement, which also mentions attacks in Beirut and against a Russian airliner over Sinai, is a departure from convention for the Asia Pacific Economic Cooperation forum, which normally focuses on trade and business issues.

The APEC bloc groups the United States and China with middle powers such as Australia, as well as with developing nations in Asia and South America. It accounts for about 60 percent of the global economy.

The leaders said they are stressing the "urgent need for increased international cooperation and solidarity in the fight against terrorism."

"We will not allow terrorism to threaten the fundamental values that underpin our free and open economies," the statement said.

President Obama, China's President Xi Jinping and Japanese Prime Minister Shinzo Abe are in the Philippine capital for the summit, as France and Russia are pursuing resolutions in the U.N. Security Council seeking to unite the international community in combating the Islamic State of Iraq and Syria (ISIS).

Mr. Obama said Thursday ISIS can't be eliminated until there's a political settlement of the multi-front war in Syria, which could take some time, the Reuters news agency reports. He added that Syrian President Bashar al-Assad can't remain in power under terms of any deal to end the hostilities.

Reacting to reports of the killing of a Chinese hostage by ISIS that underscored the threat of terrorism across the globe, China's Xi called the group the "common enemy of humankind" in comments quoted by the official Xinhua News Agency.

ISIS said in its magazine Wednesday that it had killed former school teacher and self-described "wanderer" Fan Jinghui, 50, and a Norwegian it was holding for ransom.

On Wednesday, the hunt by French police for the mastermind of last week's attacks led to a gun battle in a Paris suburb. Two people were killed and eight arrested.

The mission of the 21-member APEC, convened in Manila under extremely tight security, is lowering barriers to trade and economic development. The declaration noted the vital link between lack of economic opportunity and terrorism.

"Economic growth, prosperity, and opportunity are among the most powerful tools to address the root causes of terrorism and radicalization," it said.

The leaders called for a renewed effort to eliminate poverty. They said economic growth has lifted many people out of poverty but it "continues to be a reality" for millions in the region.

Apart from uniting against the attacks in Paris and the deepening crisis in Syria, the leaders are also seeking to promote cooperation against climate change. Disputes between China and its Southeast Asian neighbors over Beijing's claims to most of the South China Sea drew attention, as well.

The first of two APEC summit retreats began Thursday with the leaders posing for a "family photo," one of several traditions of the annual gatherings that rotate from one member to the next.

All the events at the summit are tightly scripted. Thousands of police and military personnel are deployed in Manila and major downtown thoroughfares are closed to all but official vehicles.

Leaders are just weeks away from a deadline to forge an agreement to limit global warming in a meeting that begins Nov. 30 in Paris.

In Manila, Mr. Obama sought to build momentum for the pact on Wednesday, reasoning that bold climate action will be a boon for businesses in Asia and around the world.

Chinese leader Xi, whose country is now the largest overall emitter of the pollutants contributing to global warming, said his country was committed to cleaning up its environment.