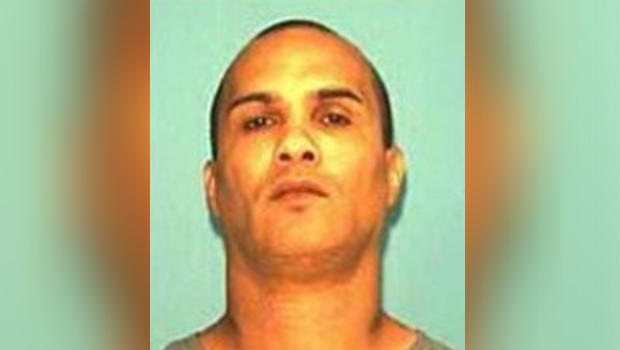 DAVENPORT, Fla. -- A man accused of killing his aunt and stabbing his father 23 times at a home near Davenport, Florida was found bleeding on the side of a road Wednesday morning, reports CBS affiliate WKMG-TV.

Police say they were called just after midnight to the home of the estranged wife of suspect Pedro Vega Jr., who had allegedly tried to force his way in before being shot by someone inside. Vega fled, but when police arrived they noticed a trail of blood to a nearby home.

A 4-year-old girl who was staying with the aunt was found covered in blood, but she did not appear to be seriously injured, Polk County Sheriff Grady Judd said.  The suspect's father, Vega Sr., was brought to a hospital where he remains in stable condition, reports CBS affiliate WTSP-TV.

The suspect was found near Highway 429 wounded about eight hours later.

Authorities have not said if a motive for the attacks is known.

Vega Jr. has been charged with a probation violation, reports the Orlando Sentinel, but charges connected to the stabbings are expected.

Vega Jr. has a lengthy criminal history, including a 1986 arrest for rape in New York, Judd said. Vega spent 13 years in prison for sexual battery in Florida, according to Judd.