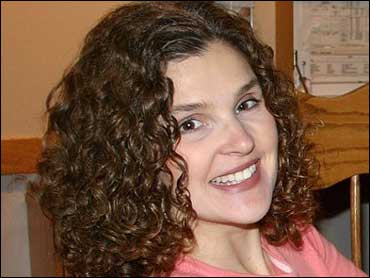 Investigators found what is believed to be the torso of a 34-year-old suburban wife and mother of two who disappeared last month and are seeking her husband as the suspect in her slaying, the Macomb County sheriff said Saturday.

Sheriff Mark Hackel said the torso was found in the garage of the home in Macomb County's Washington Township shared by Tara Grant and her husband, Stephen, following a search that began Friday night.

Stephen Grant is now being sought and will be charged with the murder of his wife. The sheriff says Stephen Grant was last believed to be driving a
yellow 2006 Dodge Dakota extended-cab pickup truck, with a license
plate number 9FLR57.

But according to CBS Station WWJ News Radio, Grant's attorney fears he may have taken his own life.

"He is the number one and at this time the only suspect in the murder of Tara Lynn Grant," Hackel told reporters at a news conference in Mount Clemens.

Hackel said investigators were looking for other evidence and additional body parts. He said a search was planned for Saturday in Macomb County.

Throughout the search, Stephen Grant has maintained his innocence.

Hackel said Stephen Grant was detained Friday before the search began, but returned to his home, where he let investigators inside and later left. Hackel said investigators didn't have evidence at the time to hold him.

Stephen Grant's lawyer, David Griem, told The Associated Press on Saturday morning that he spoke twice with his client earlier in the day. He said he hoped to arrange for Grant to turn himself in to authorities.

"He was suicidal," Griem said. "I spent some significant period of time begging him to meet with me and reminding him of all the reasons why he had to live: the foremost being a 4-year-old and a 6-year-old who love him very much."

Griem said his client last was in the Detroit area, but he didn't know exactly where.

Griem learned of the search when Grant called him from the back of a police car on Friday. Grant later let investigators inside and was picked up by his sister, then went to stay with family members, Griem said Friday.

Deputies cordoned off entrances leading into the Grants' subdivision, the sheriff said, and a Michigan State Police mobile crime lab vehicle was at the house.

A 4 1/2-hour search last weekend through wooded areas near the couple's home 30 miles north of Detroit turned up no clues.

The case has been a daily fixture on local TV newscasts and in Detroit's newspapers. It has conjured comparisons to media-saturated missing-women cases such as those of Laci Peterson and Natalee Holloway.

Tara Grant was working as an operations manager for Boise, Idaho-based Washington Group International, an engineering and construction firm with an office in the Detroit suburb of Troy. Her job regularly sent her to Puerto Rico.

The Grants have two children, a 6-year-old girl and a 4-year-old boy who were staying Friday with Stephen Grant's sister, Kelly Utykanski of Sterling Heights. They did not see the search or their father being detained.
Investigators found what is believed to be the torso of a 34-year-old suburban wife and mother of two who disappeared last month and are seeking her husband as the suspect in her slaying, the Macomb County sheriff said Saturday