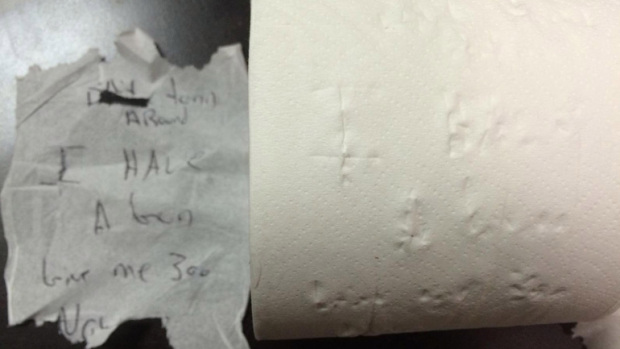 UNIONTOWN, Pa. - Police say they matched a would-be pizza shop robber to a roll of toilet paper in his Pennsylvania home.

Uniontown police say 29-year-old Eric Frey tried to rob Michael Maria's Pizza on Saturday by handing an employee a note written on toilet paper that read: "I have a gun. Give me $300."

Police arrived before Frey could leave because an employee hit a panic button.

Frey told officers he was forced to commit the robbery by a large, bearded man with a gun who accosted him in a nearby alley.

But police say a search of Frey's apartment wiped out that explanation: That's where they say they found a newly opened roll of toilet paper with the pen impression from Frey's note on an outer sheet.