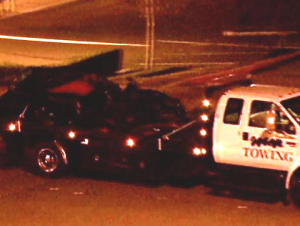 LOS ANGELES - Detectives arrested a teenager accused of stealing some wreckage from the Porsche that "Fast & Furious" star Paul Walker was in when he died in a crash in California, and a second suspect was planning to turn himself in, authorities said.

The theft occurred as the 2005 Porsche Carrera GT was being towed from the accident scene Saturday night, Los Angeles County sheriff's officials said.

The investigation led detectives to Jameson Witty, 18, who was arrested Thursday at his home in Los Angeles and was being held on $20,000 bail, the Sheriff's Department said in a statement.  A second suspect, a 25-year-old man whose name has not been released, was outside California and arranging to surrender, the statement said.

CBS Los Angeles reports the suspects will likely be charged with felony grand theft and tampering with evidence.

Witnesses told investigators that they saw someone driving behind the tow truck that was hauling away wreckage hours after the fiery crash that killed Walker and friend Roger Rodas, who was driving the car and also died.

Witnesses said a man got out of the car when the truck was at a stoplight, grabbed the part, and drove away.

Detectives identified the two suspects, and while serving a search warrant at a home in Canyon Country, a community north of Los Angeles, they found a red T-top roof panel from the Porsche, sheriff's officials said. However, they would not say what led them to the two men or what evidence they had against them.

It wasn't clear if Witty has an attorney, and no phone listings for family or associates could be found.

Walker, who starred in all but one of the six "Fast & Furious" blockbuster films that glorified fast cars and dangerous driving, was killed when the Porsche smashed into a light pole and tree then caught fire on Saturday afternoon, authorities said.

Sheriff's investigators are still trying to determine what caused Rodas to careen out of control and crash.