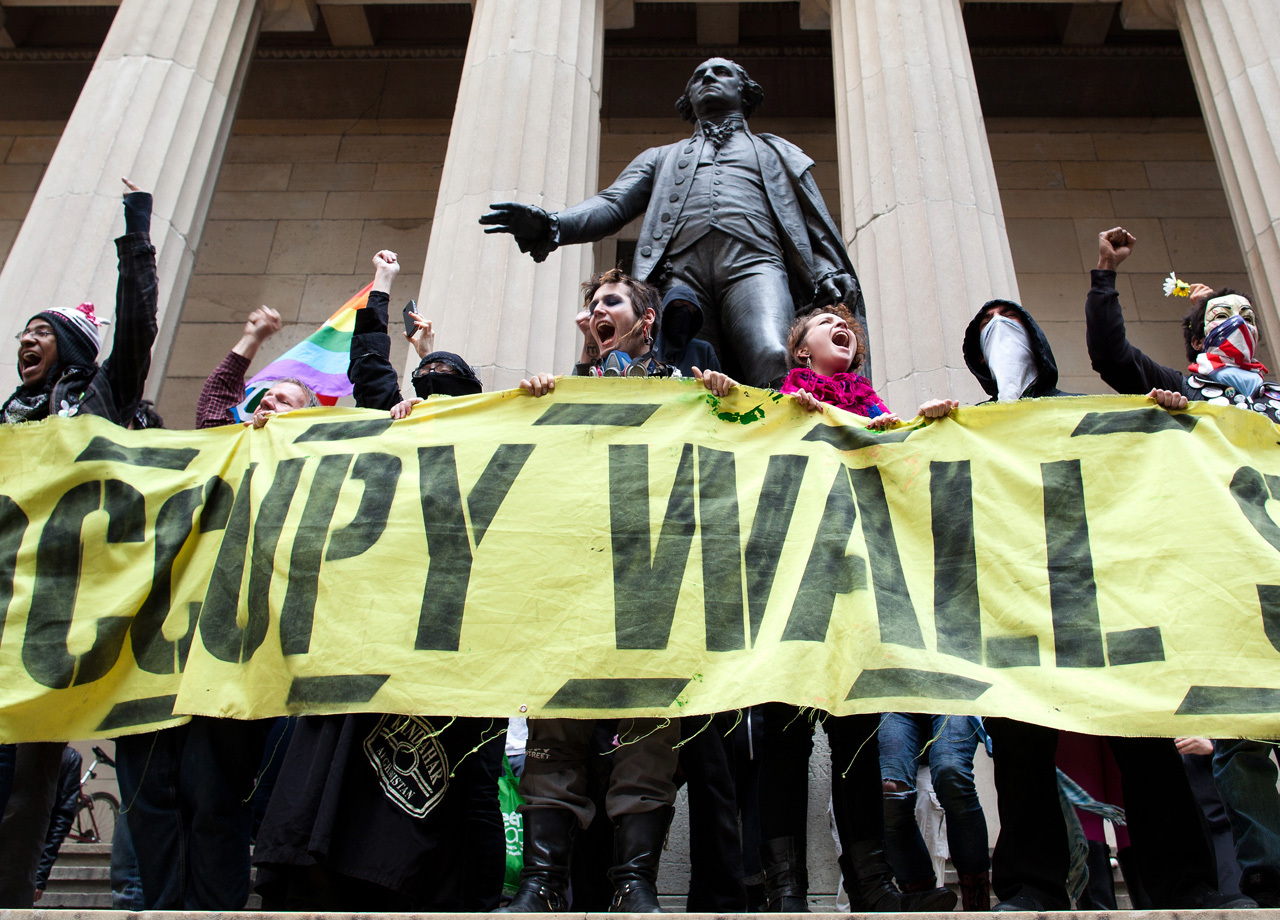 (AP) NEW YORK - Dozens of police officers cleared the park where the Occupy movement was born six months ago and made several arrests after hundreds of protesters returned in an anniversary observance and defiantly resisted calls to clear out.

Some demonstrators locked arms and sat down in the middle of Zuccotti Park near Wall Street after police announced on a bullhorn at around 11:30 p.m. Saturday that the park was closed. Officers then poured into the park, forcing most of the crowd out and surrounding a small group that stayed behind. Police formed a human ring around the park to keep protesters out.

Several people were arrested, police said. An unused public transit bus was brought in to cart away about a dozen demonstrators in plastic handcuffs. One female under arrest had difficulty breathing and was taken away in an ambulance to be treated.

For hours, the demonstrators had been chanting and holding impromptu meetings in the park to celebrate the anniversary of the movement that has brought attention to economic inequality, as police mainly kept their distance.

"They set up tents. They had sleeping bags," he said. Electrical boxes also were tampered with and there was evidence of graffiti.

Sessa said Brookfield Properties, the park owner, sent in security to advise the protesters to stop pitching tents and to leave the park. The protesters, in turn, became agitated with them. The company then asked the police to help them clear out the park, the detective said.

"Most of the people, they left the park," Sessa said. "People who refused to leave and were staying were arrested."

Many protesters shouted and officers took out their batons after a demonstrator threw a glass bottle at the bus that police were using to detain protesters.

Sandra Nurse, a member of Occupy's direct action working group, said police treated demonstrators roughly and made arbitrary arrests. She disputed the police assertion that demonstrators had broken park rules by putting up tents or getting out sleeping bags.

"I didn't see any sleeping bags," she said. "There was a banner hung between two trees and a tarp thrown over it ... It wasn't a tent. It was an erect thing, if that's what you want to call it."

She said they had reports of about 25 demonstrators arrested in the police sweep.

Earlier in the day, with the city's attention focused on the huge St. Patrick's Day parade many blocks uptown, the Occupy rally at Zuccotti drew hundreds of people.

Documentary filmmaker Michael Moore, who had given a speech at a nearby university, also made an appearance at the park, milling around with protesters.

With the barricades that once blocked them from Wall Street now removed, the protesters streamed down the sidewalk and covered the steps of the Federal Hall National Memorial. There, steps from the New York Stock Exchange and standing at the feet of a statue of George Washington, they danced and chanted, "We are unstoppable."

Police say arrests were made, but they didn't have a full count yet.

As always, the protesters focused on a variety of concerns, but for Tom Hagan, his sights were on the giants of finance.

"Wall Street did some terrible things, especially Goldman Sachs, but all of them. Everyone from the banks to the rating agencies, they all knew they were doing wrong. ... But they did it anyway. Because the money was too big," he said.

Dressed in an outfit that might have been more appropriate for the St. Patrick's Day parade, the 61-year-old salesman wore a green shamrock cap and carried a sign asking for saintly intervention: "St. Patrick: Drive the snakes out of Wall Street."

Stacy Hessler held up a cardboard sign that read, "Spring is coming," a reference, she said, both to the Arab Spring and to the warm weather that is returning to New York City. She said she believes the nicer weather will bring the crowds back to Occupy protests, where numbers have dwindled in recent months since the group's encampment was ousted from Zuccotti Park by authorities in November.

But now, "more and more people are coming out," said the 39-year-old, who left her home in Florida in October to join the Manhattan protesters and stayed through much of the winter. "The next couple of months, things are going to start to grow, like the flowers."

Some have questioned whether the group can regain its momentum. This month, the finance accounting group in New York City reported that just about $119,000 remained in Occupy's bank account — the equivalent of about two weeks' worth of expenses.

But Hessler said the group has remained strong, and she pronounced herself satisfied with what the Occupy protesters have accomplished over the last half year.

"It's changed the language," she said. "It's brought out a lot of issues that people are talking about. ... And that's the start of change."