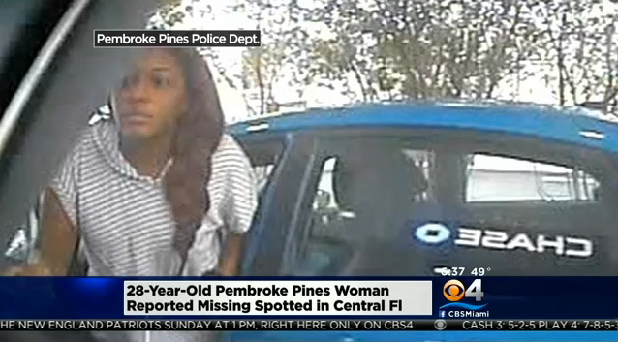 On Wednesday, police suspended the search for Malika James after Pembroke Pines police released photos of James at an ATM in Winter Haven on Monday at 7:41 a.m., according to the Miami Herald. These images, according to a police report, reportedly show her to be alone in her car -- in good physical condition.

Officers say no foul play is expected, according to CBS Miami.

"She's not in our system as a missing person," Pembroke Pines Police Capt. Al Xiques told the Miami Herald. "She's not technically missing. We know where she is. She is willingly going."

Police also told CBS Miami that James is an adult who does not suffer from any medical condition and is of sound mind.

However, family and friends still remain skeptical. Her father, Leonard James, told the paper on Wednesday, that although they have relatives in Atlanta, he still hasn't heard from her.

"Last thing we got is the picture," her father said, referring to the images from the surveillance video. "Still pictures don't show you everything."

"We do not know why and where she is going, but we will still be looking for her and trying to figure out what's going on with our friend," read a post on Facebook Tuesday afternoon. Posts had been plastered across social media sites in an attempt to search for James.

First reported missing Sunday by her father, James reportedly left her home Saturday morning without her phone. She had been scheduled to work an art event that evening at Basel Castle, an arts and music festival in Miami, according to the paper.

She was believed to be in her car, a blue 2014 Ford Fiesta, with damage to the driver's door due to a recent accident.