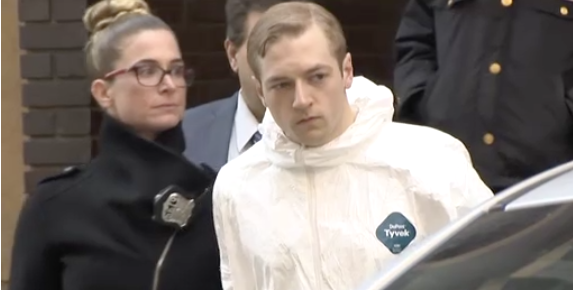 NEW YORK -- Police say a man who turned himself in after a deadly stabbing in Midtown Manhattan told investigators he came to New York from Maryland to kill a black person, reports CBS New York.

James Harris Jackson, the 28-year-old suspect, surrendered to police at the Times Square substation Wednesday morning. Police say the Baltimore resident was caught on surveillance video running down the street after the stabbing Monday night, according to police.

Officials said a witness saw the suspect talking with 66-year-old Timothy Caughman around 11:30 p.m. The suspect then got on top of Caughman, who asked him what he was doing, police said. The victim later walked into the police substation with stab wounds to the chest and back. He was taken to Bellevue Hospital where he later died.

“His intentions were to come here to harm male blacks,” NYPD Chief of Manhattan Detectives William Aubry said. “The reason why he picked New York is because it’s the media capital of the world, and he wanted to make a statement.”

“He knew what he was doing when he was coming up here,” Aubry added.

Aubry said police believe Jackson has been harboring feelings of hatred toward black men for at least 10 years.

At a news conference, the NYPD showed off a 26-inch mini-sword that they say was used in the fatal attack.

CBS New York reports the suspect told police he’s an Army veteran who does not like black people, and traveled to New York with the purpose of killing a black person.

Mayor Bill de Blasio said the attack was “an assault” on the city’s inclusiveness and diversity and calls Caughman’s death “an unspeakable human tragedy.” He urges New Yorkers to “speak clearly and forcefully in the face of intolerance and violence.”

The victim lived at the Barbour Hotel, which houses homeless people, CBS New York reports. He was seen at the hotel 45 minutes before the alleged stabbing.

“He did not attack anybody else as far as we know right now but the thought was there,” Aubry said. “We’re very fortunate that it stopped at one and it wasn’t more.”

Jackson has been charged with second-degree murder.