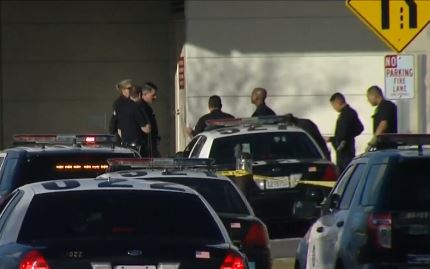 TORRANCE, Calif. - A man was shot dead by a police officer inside the Harbor-UCLA Hospital emergency room Saturday afternoon, according to officials.

Earlier in the day, the suspect was placed under arrest for allegedly assaulting a neighbor, police said.

Around 8:30 a.m, officials said the deceased was throwing bottles at neighbors.

While being subdued by officers in that arrest, the suspect allegedly assaulted two officers. The subject was taken to the hospital and handcuffed.

Hours later when they believed he was calm, officers removed the handcuffs. They said the suspect again became combative, including throwing objects (including a metal stool) at officers.

"A witness stated that the suspect reached for one of the officer's guns and at that point, an officer-involved shooting occurred. One round was fired, striking the suspect," said LAPD Commander Phillip Tingirides.

The deceased was 26 years old. His name is withheld until his next of kin is notified.

No one else was injured during the incident, officials said.