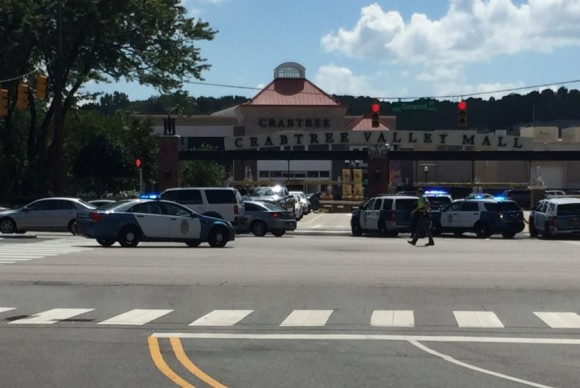 RALEIGH, N.C. - Witness reports of gunshots ringing out inside a busy North Carolina mall caused chaos Saturday afternoon as shoppers ran screaming for the doors or sheltered in stores while dozens of officers arrived.

Police said hours later they were investigating but hadn't confirmed whether any shots had been fired, adding no one was found wounded by gunfire although there were several minor injuries among people running away. The shopping complex in an affluent area of Raleigh was put on lockdown while helicopters buzzed overhead and numerous law enforcement vehicles swarmed the shopping area.

Raleigh police said they initially responded at 2:30 p.m. to reports that shots had been fired inside Crabtree Valley Mall. They said they had not made any arrests by late afternoon.

"We are examining all possibilities," Raleigh Police Chief Cassandra Deck-Brown told reporters at a news conference.

The police chief said no shell casings had been found by late afternoon. But she noted that witnesses heard what sounded like gunshots, and added the heavy police presence showed that the department was taking the situation seriously.

Eight people ranging in age from 10 to 70 were transported to hospitals for treatment of injuries suffered as they rushed to leave the mall, she said. None of those injuries appeared to be life-threatening.

Video posted on social media sites shows dozens of people running toward mall exit doors as numerous screams were heard. Outside the mall, where people gathered afterward, a police officer got on the loudspeaker of a fire truck and said there was no one shot in the mall. Witnesses described chaos after reports of shots.

A witness, Laurren Baker, told CBS News that she and her friends heard gunshots as they were entering the mall. They turned and ran outside, along with a rush of other people. Baker said the incident happened near the mall's food court and she saw a person get handcuffed, but police have not confirmed those details.

John Riggleman and Kristin Warring said in an interview that they were heading to a video game store when they heard shots coming from the food court. They quickly ran into the store with dozens of others. Police told them they could leave the store at about 3 p.m.

Riggleman said they were inside the video game store for about a half-hour. When they finally were allowed to leave, they passed about 10 officers or SWAT team members moving the other way with guns drawn.

"They had guns up, kind of covering us as we were running out. And then there were more back toward the exit kind of telling people where to go," Riggleman said.

Another person said he saw an argument between two men in the food court that led to at least four shots being fired. Antonio Richardson told The Associated Press that he saw two men who appeared to be in their early 20s arguing and that one of them began shooting.

Footage from a news helicopter showed shoppers filing out of the mall with their hands over their heads as police took control of the scene.

Deck-Brown said at her news conference that the mall had been emptied and people weren't being allowed back inside in the hours after the shooting.

In the late afternoon heat, scores of people gathered outside the mall, appearing to wait for news of what happened or to find loved ones who had sheltered inside.

Zoe Hanks, 12, was at a hairdresser inside the mall, having the hair around her shoulders lightened, when word of an emergency came. She left with chemicals still in her hair and a towel around her neck. She said she knew it was time to go when "all the people were running."