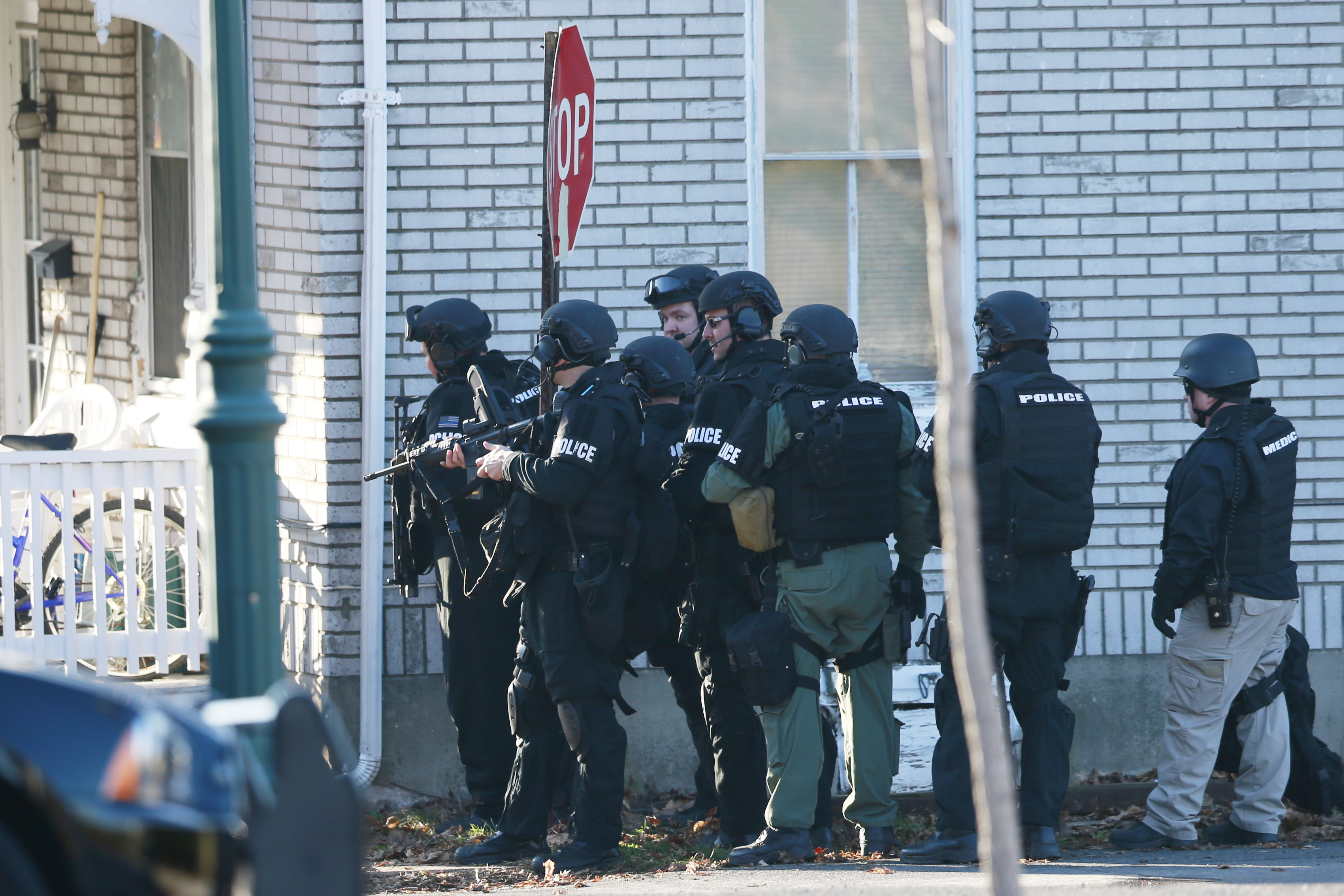 PENNSBURG, Pa. -- A man killed six people as he weaved across the Philadelphia suburbs in a predawn rampage Monday, authorities said.

Bradley William Stone, 35, started at his ex-wife's Harleysville apartment, breaking in through a glass door around 4 a.m., firing multiple rounds and fleeing with their two children, the woman's neighbors said. Stone was believed to be holed up in his home in Pennsburg, but police said late Monday they are uncertain of his whereabouts.

Late Monday night, police in neighboring Bucks County swarmed an area outside Doylestown after a reported attempted carjacking by a man said to have been dressed in fatigues and similar in appearance to the suspect.

Also, the Central Bucks YMCA is on lockdown after someone said they saw Stone in Doylestown. Police are reportedly searching woods in the area, CBS Philadelphia reported.

Police believe one of the victims is his ex-wife, Nicole, who was recently engaged and had told neighbors she feared he would kill her.

"She would tell anybody who would listen that he was going to kill her, and that she was really afraid for her life," said Evan Weron, a neighbor of Nicole Stone.

Montgomery County District Attorney Risa Vetri Ferman says investigators have recovered Stone's cellphone and his car. She says Stone might not need a cane or walker he's been known to use.

Stone had a "familial relationship" to all the victims, Ferman said. The two children Stone took from his ex-wife's house were safe, Ferman said.

Their 17-year-old son, Anthony Flick, was pulled from the home with a head wound around 12:30 p.m. and was taken in an armored vehicle and then by helicopter to a Philadelphia hospital for treatment.

Nicole Stone's mother, Joanne Hill, and grandmother Patricia Hill were killed next at their home in nearby Lansdale. Investigators were alerted by a hang-up call to emergency dispatchers, Ferman said.

A woman, who witnessed parts of the incident in Lower Salford, told CBS Philadelphia about what she saw.

"I heard four gunshots, and I heard the kids screaming, 'Mommy, no! We want Mom!' the woman recalled. "And I ran into my son's room and looked out the window, and he was actually taking the kids in the car and leaving."

The woman says at that point, she opened her window and asked the suspect if everything was okay.

Stone, about 5-foot-10 and 195 pounds, was likely wearing military fatigues and was known to use a cane or walker, Ferman said.

The shootings occurred before dawn at homes in Harleysville, Lansdale and Souderton, which are within a few miles of each other.

Police with armored vehicles and rifles flocked to Pennsburg after spending several hours at the home in Souderton where several victims were found. In Pennsburg, police tried to compel his surrender with a bullhorn and loud explosions.

"Bradley, this is the police department!" officers yelled throughout the standoff. "Come to the front door with your hands up. You're under arrest."

In March 2009, Stone and his then-wife filed for divorce.

They recently sparred over custody of their two children, with Stone filing an emergency petition Dec. 5 and Nicole responding with a counterclaim Dec. 9, according to court records. The outcome of their dispute was not clear.

Nicole Stone's neighbors say they were awoken by the sounds of breaking glass and gunshots.

Weron described Brad Stone as a former member of the military. He said Nicole Stone would talk frequently about the custody dispute.

"(Nicole) came into the house a few times, a few separate occasions, crying about how it was very upsetting to her," Weron said.

Several school districts ordered students and teachers to shelter in place. The Souderton Area School District lifted the order after about two hours but said officials were monitoring the situation.

A woman, who witnessed parts of the incident in Lower Salford, spoke to CBS Philadelphia's Steve Patterson about what she saw.

"I heard four gunshots, and I heard the kids screaming, 'Mommy, no! We want Mom!'" the woman said. "And I ran into my son's room and looked out the window, and he was actually taking the kids in the car and leaving."

The woman says at that point, she opened her window and asked the man if everything was okay.

The woman also says the man took the kids with him and that they were in their pajamas and were not wearing coats. The children were later found safe.