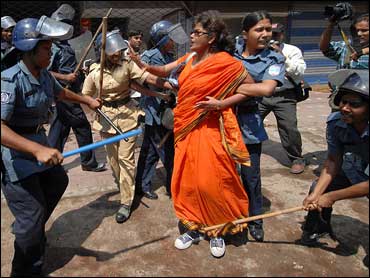 The protesters from an opposition alliance were fired upon as they tried to block the entry points to Dhaka as part of a campaign to pressure Prime Minister Khaleda Zia to step down and to demand electoral reforms.

The alliance, led by former Prime Minister Sheikh Hasina, accuses the government of corruption and authoritarianism and of trying to use the election commission to guarantee victory in the next election due in January 2007. The government denies the charges.

Clashes were reported in at least five points across the city, according to Associated Press reporters at the scenes and private TV station ATN Bangla.

At Kanchpur on the southeastern outskirts of Dhaka, police used tear gas and batons when about 3,000 opposition activists gathered on a highway leading to the capital, witnesses said.

The protesters responded by throwing stones.

Similar clashes were reported in Tongi and Gabtali, the two other key entry points to Dhaka in the north. Violence also broke out in Dhaka's central Dhanmandi and Kalabagan districts, close to the Hasina's office.

Authorities deployed about 20,000 security officials in and around the city of 10 million people to prevent any violence, the country's police chief, Abdul Qaiyum, said Saturday night.

"We will do whatever required to keep the law and order under control," Qaiyum told reporters.

Sunday is a working day in Muslim-majority Bangladesh.

The opposition has launched a campaign of general strikes and street protests to demand the resignation of Zia's four-party coalition government, as well as an early election and election commission reforms.

The alliance alleges that the government is using the election commission to win the next elections.

Zia has vowed to remain in power until October this year, when her government's five-year term expires.

Under Bangladesh's constitution, Zia will hand over power to a nonpartisan caretaker administration to supervise the January polls.