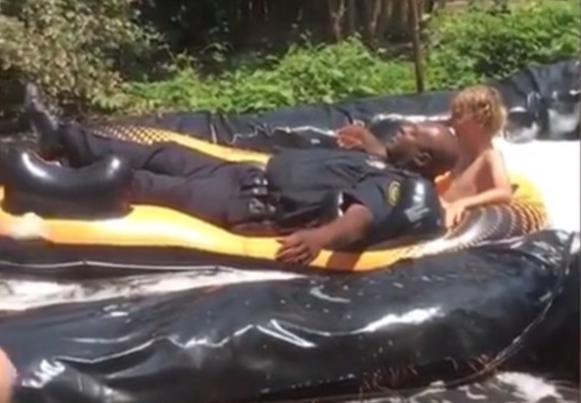 As police officers pulled up next to their massive 50-foot homemade Slip 'N Slide, kids at a neighborhood block party in Asheville, North Carolina, on Sunday thought the fun was coming to an end.

Little did they know that with officers Joe Jones and Carrie Lee on the scene, the party was just getting started.

"Don't worry, we're not here to break up your fun," Lee told a group of about 50 residents. "We received a call about the road being blocked -- so here we are."

After assessing the situation, the officers determined the water slide could stay. It wasn't blocking the road and there was room for emergency vehicles to pass on the righthand side.

But before they left, Lee had one more request: "Grab me one of those plastic Glad bags."

The kids ran to grab a bag and before they knew it, Lee was sliding down feet-first.

"We for sure did not expect that," Asheville resident Katlen Joyce Smith told CBS News. "She went first in the plastic bag -- and joked, 'This is going to make such a good body-cam video.'"

Next up: Officer Jones.

After chatting with Jones for a few minutes, the group of 10 kids mustered up the courage to ask the nearly 6-foot-6 officer to slide down after his partner.

"I thought I was going to be able to get out of it. She went down a trash bag and I'm too big to go down a trash bag," Jones explained in a video the police department posted on Twitter. "But then the kids pulled out this big raft and then I had no choice."

The officer joined a young boy in a double inner tube and the pair went flying.

"The kids were squealing. Everyone was screaming," Smith said. "We just couldn't believe it. We were all laughing hysterically."

Smith said this was the first year the neighborhood decided to come together to build their own homemade water slide using old carpet remnants, plastic and straw bales.

"We probably had like at least 20 handles of Dawn dish soap to keep it slippery for the kids and adults," Smith said. "We were all bruised and sore after throwing our bodies down the slide for hours on end."

Somehow, no one, including the officers, seemed to mind.