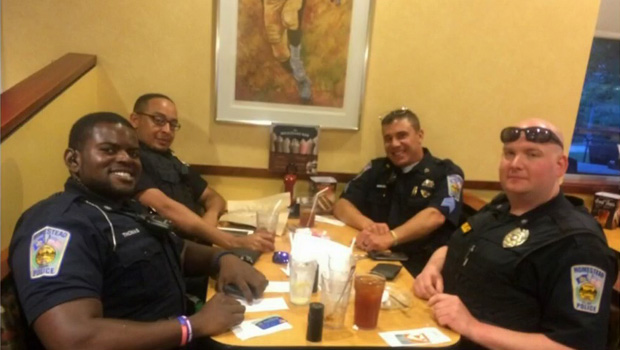 It was Friday night at an Eat'n Park restaurant in Homestead, just outside Pittsburgh.

Four police officers were sitting down at a table for dinner. Employees said the officers are regulars at the restaurant.

The officers had placed their order and were waiting.

"I heard talk, and I happened to glance over, and there was a couple that was coming into the restaurant, and they decided that they didn't want to sit with us, and they made it very adamant," said Homestead Police Sgt. John Kaschauer.

"They looked over, and they said, 'We don't want to sit here,'" said Louann Davis, a waitress. "You could tell that they were looking at the police, and so they moved them to another section."

Under other circumstances, the couple moving to the other side of the restaurant would be the end of it. But with all that has happened in the country over the last week, the officers saw this as an opportunity.

While comfortable with their local residents, these officers are feeling the recent tensions on the street.

"I do feel it from people that might be on a traffic stop or passing through the area, just little things they say," Kaschauer said.

But they didn't expect it in a restaurant, so they decided to pick up the couple's check.

"Showing that just because you don't like somebody doesn't mean you can't be kind to them," Kaschauer said.

They sent the check to the table with a message reading, "Sir, your check was paid for by the police officers that you didn't want to sit next to. Thank you for your support." They left a $10 tip, too.

"They want to make it known that in our community they are here to be our friends and take care of us and not our enemies that are out to get you," Davis said.

As Kaschauer put it, "Not all cops are bad, not all people are bad."