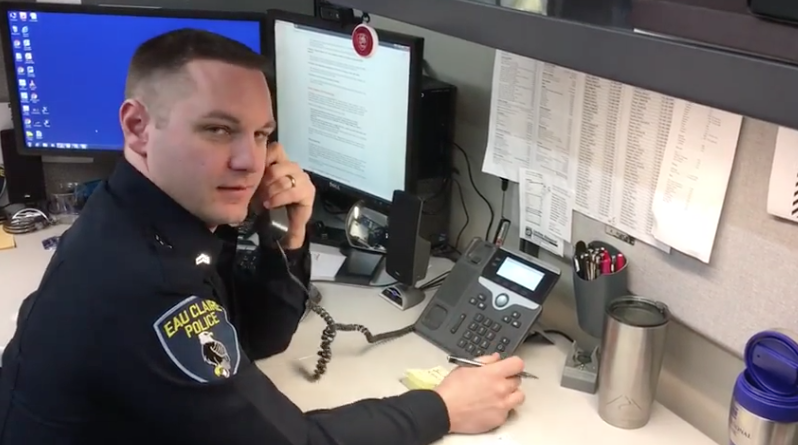 Kyle Roder was clearing his voicemail inbox when a message from an unknown number popped up. It was from a man who claimed to work for the IRS, threatening him to call back right away “or you will be arrested.”

It was a surprising message to receive, especially since Roder is a police officer with the Eau Claire Police Department in Wisconsin. Assuming it was a scam, the officer decided to call back, and he recorded the whole exchange.

“Hello, is this the IRS? It said to call this number, you said I had committed a fraud or something?” Roder asked.

The man on the other end replied, “Yes,” and asked for a case number. When Roder said he was never provided one, the man said he could look it up if he provides his address.

“But you said you’re going to issue a warrant for me and come to my house,” Roder said. “If you don’t have my address, how are you going to do that?”

The officer then asked how much time he had until he would be arrested. Mumbling, the man said he would have “until our working hours are over.”

“Can I just go to my local IRS office and do this?”

“I’m really sorry to say, but your local office doesn’t have your case file anymore,” he replied. “Your case file has been handed to us, because you’re being investigated by our department.”

After asking for the man’s name and “badge number,” Roder finally asked the obvious question, “How do I know this isn’t a scam? I see all these things on the news that the IRS won’t call you, they’re just going to send you a letter.”

“In some emergency cases we do make phone calls so that we can contact the taxpayer,” he said.

Detective Don Henning with the Eau Claire County Sheriff’s office confirmed that, despite what the man on the phone claimed, the sheriff’s office does not receive warrants from the IRS.

“The sheriff’s office does not receive information from the IRS or warrants for citizens based on phone calls like this,” Henning explained. “This is truly a scam.”

It’s not an uncommon one, either.

Fake IRS agents and similar impostors have overtaken identity thieves to become the nation’s top fraudsters, according to the latest consumer complaint data. The Federal Trade Commission’s Consumer Sentinel project, which tallies up the number and type of consumer complaints received each year, reported more than 3 million of them in 2016. Debt collection remains the No. 1 gripe, accounting for some 28 percent of reported complaints.

While many people may already be aware of the scam, Roder wanted to share his phone call to better assist people in identifying warning signs. And it looks like the message is getting out — more than 3 million people have viewed the officer’s video on Facebook and nearly 95,000 have shared it since it was posted Tuesday.

It may seem funny to scam the scammer, but Roder reminds viewers, he’s “a trained professional — do not try this at home.” Just hang up.