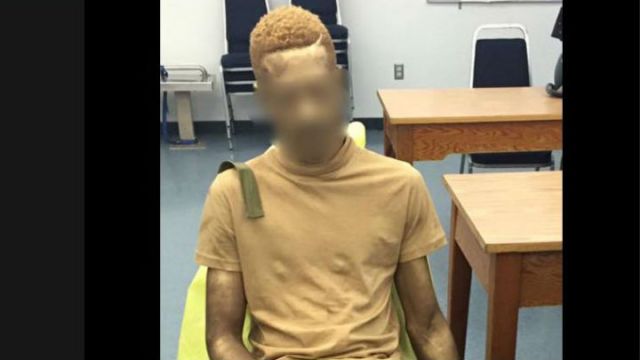 RICHMOND, Calif. -- Authorities say a man covered in gold spray paint was arrested on suspicion of drunken driving in the San Francisco Bay Area after he allegedly hit three cars on a freeway and then led police on a brief chase.

The San Francisco Chronicle reports that the chase on Interstate 80 in Richmond came to an end when a wheel fell off his car. No one was injured.

An off-duty California Highway Patrol officer witnessed the beginning of the mayhem and followed the car, according to the paper. However, he soon received an odd description of the driver.

"While enroute, we received a description of the suspect as being 'gold.' Well, the description was certainly correct as the suspect was covered head to toe in gold spray paint," police later wrote in a Facebook post.

Wilkenfeld said Cook told officers that he was on his way to a photo shoot, according to CBS San Francisco. It was not immediately clear if he has an attorney.

Cook was taken to a hospital for observation, according to the station. He was medically cleared and was arrested on suspicion of driving under the influence and hit-and-run.

He was reportedly placed in jail in lieu of $10,000 bail. Wilkenfeld says he did not know whether the suspect was still in custody.

Cook is scheduled to be arraigned on April 22, according to CBS San Francisco.