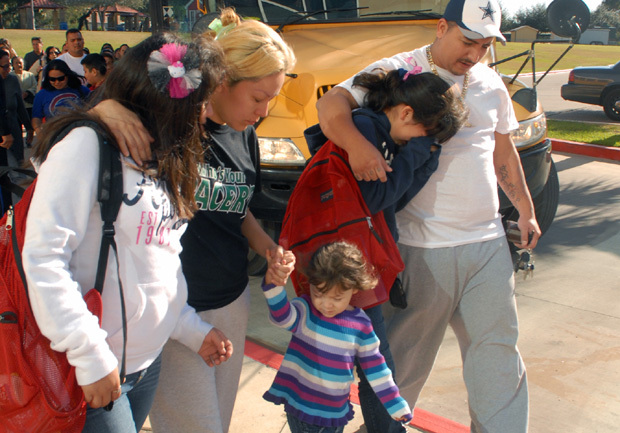 BROWNSVILLE, Texas - Police shot and killed an armed eighth-grader who "engaged" officers in the main hallway of his middle school on Wednesday, the South Texas school district said.

The school, with an enrollment of about 750 students, was placed on lockdown when administrators called police and no one else was injured, Brown said.

A seventh grade student who said he was two classrooms from where the shooting took place said the school was already on lockdown when he heard three shots. Miguel Grimaldo, 12, said students later followed police out of the building and boarded buses that took them to a neighboring park, where his mother picked him up late Wednesday morning.

"For now they're not saying anything, just pick up your kids," said the boy's mother, Maria Grimaldo.

The street in front of Cummings was lined with police cars and blocked off. About two hours after the shooting, dozens of frustrated parents and relatives flooded out of the park pavilion without their children after school officials announced that all remaining children had been bused to a high school and could be picked up there.

Daniel Lozano, the father of a 14-year-old eighth-grader, told CBS affiliate KENS that he and his wife closed up their small grocery and rushed to the school to find information. He expressed alarm that someone had been able to get a gun into the middle school.

"This is really messed up," Lozano said. "I thought they had more security."

Julie Tomalenas waited for an hour to pick up her 13-year-old sister before being told of the relocation.

"It was very stressful not knowing if she was OK, where she was, when we could see her again," Tomalenas said.

The lockdown was lifted about two hours after the shooting, but the students and employees were relocated while officers investigated at the school, Brown said.

Brownsville police Detective J.J. Trevino said investigators hadn't determined whether the student fired any shots, and he said officers had no information on why the student might have had the gun on him.

"It's still under investigation, as far as how he came about to bringing the weapon or if he encountered anybody or anything else," Trevino said.

Brownsville is 280 miles south of San Antonio on the southern tip of Texas.