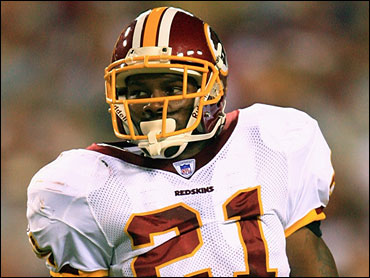 Pro Bowl safety Sean Taylor died Tuesday after he was shot in his home by an apparent intruder, leaving the Washington Redskins in mourning for a teammate who seemed to have reordered his life since becoming a father.

The 24-year-old player died at Jackson Memorial Hospital, where he had been airlifted after the shooting early Monday.

"It is with deep regret that a young man had to come to his end so soon," father Pedro Taylor said in a statement on behalf of the family. "Many of his fans loved him because the way he played football. Many of his opponents feared him the way he approached the game. Others misunderstood him, many appreciated him and his family loved him."

A string of mourners, including Taylor's father, visited the player's home and embraced outside. Authorities entered the home, but it was unclear what they were doing.

NFL commissioner Roger Goodell said the league will honor Taylor's memory at all games this weekend.

"This is a terrible tragedy involving the loss of a young man who leaves behind many people struggling to understand it," he said in a statement.

His attorney says Taylor and his girlfriend heard a bump in the night at Taylor's Palmetto Bay home sometime after 1 a.m., reports CBS News correspondent Kelly Cobiella. Taylor locked the bedroom door and grabbed a machete from under the bed. The door burst open and a gunman fired two shots. Taylor was hit once in the upper leg, damaging the key femoral artery and causing significant blood loss.

Taylor's 1-year-old daughter, Jackie, was also in the house, but neither she nor Taylor's girlfriend was injured.

Trauma experts said a serious wound to the femoral artery, leading from the abdomen through the upper thigh, is among the most difficult to fix and can quickly drain the body of blood. Too long a blood loss prevents oxygen from reaching the brain and vital organs.

"According to a preliminary investigation, it appears that the victim was shot inside the home by an intruder," Miami-Dade County police said in a statement.

Police spent Tuesday searching Taylor's home for clues, adds Cobiella. They have hundreds of leads but, so far, no suspects.

Redskins coach Joe Gibbs said what he would remember most about Taylor was his excitement about playing football.

"God made him to play football," Gibbs said Tuesday during a news conference. "To me, he just loved and thrived on the competition part of it. ... Sean, he loved football. He loved these guys here."

Gibbs acknowledged it will be hard to concentrate on football this week.

"I don't know how we'll deal with it, except we'll all do it together," he said.

Fans already had begun a makeshift memorial by laying flowers on a field near the front entrance to the Redskins' practice facility in Ashburn, Va.

"This is a terrible, terrible tragedy," Snyder said.

He added the team would honor Taylor with a patch on the jersey and the No. 21 on the helmet.

Portis also played with Taylor at the University of Miami. He had sensed a new maturity in his close friend.

"It's hard to expect a man to grow up overnight," Portis said. "But ever since he had his child, it was like a new Sean, and everybody around here knew it. He was always smiling, always happy, always talking about his child."

Two bouquets were left by a palm tree outside a front gate of Taylor's home. Beside the mailbox, an untouched newspaper lay with news of his shooting.

Taylor's death comes nearly a year after Broncos cornerback Darrent Williams was killed in a drive-by shooting following an argument at a Denver nightclub on Jan. 1. University of Miami defensive lineman Bryan Pata was shot to death in November 2006 several miles from Taylor's home in an unsolved killing.

"Sean has been a close friend of mine since our days at the University of Miami," New York Jets linebacker Jonathan Vilma said in a statement. "He was a great teammate and an even greater person. It is so hard for me to fathom that I am not going to be able to pick up the phone to call him."

Doctors had been encouraged late Monday when Taylor squeezed a nurse's hand, according to Vinny Cerrato, the Redskins' vice president of football operations. But family friend Richard Sharpstein said he was told Taylor never regained consciousness after being taken to the hospital.

"He lost a lot of blood from the gunshot wound, which hit him in the upper thigh and apparently perforated his femoral artery, bled out a lot," Sharpstein told CBS News.

"This is a senseless, ridiculous, unnecessary tragedy," Sharpstein added.

The attack came eight days after an intruder was reported at Taylor's home. Officers were sent to the home about 1:45 a.m. Monday after Taylor's girlfriend called 911.

Police found signs of forced entry, but have not determined if they were caused Monday or during the previous burglary.

The shooting happened in the pale yellow house Taylor bought two years ago. In last week's break-in, police said someone pried open a front window, rifled through drawers and left a kitchen knife on a bed.

Taylor starred as a running back and defensive back at Gulliver Prep in Miami. His father is police chief of Florida City.

A private man with a small inner circle, Taylor rarely granted interviews. But, behind the scenes, Taylor was described as personable and smart.

After Taylor was drafted, problems soon began. Taylor fired his agent, then skipped part of the NFL's mandatory rookie symposium, drawing a $25,000 fine. Driving home late from a party during the season, he was pulled over and charged with drunken driving. The case was dismissed in court, but by then it had become a months-long distraction for the Redskins.

Taylor also was fined at least seven times for late hits, uniform violations and other infractions over his first three seasons, including a $17,000 penalty for spitting in the face of an opponent during a 2006 playoff game.

Taylor endured a yearlong legal battle after he was accused in 2005 of brandishing a gun at a man during a fight over allegedly stolen all-terrain vehicles near Taylor's home. He eventually pleaded no contest to two misdemeanors and was sentenced to 18 months' probation.

Taylor said the end of the assault case was like "a gray cloud" being lifted. It was also around the time that his daughter was born, and teammates noticed a change.

On the field, Taylor's play was often erratic. Assistant coach Gregg Williams frequently called Taylor the best athlete he'd ever coached, but nearly every big play was mitigated by a blown assignment. Taylor led the NFL in missed tackles in 2006 yet made the Pro Bowl because of his reputation as one of the hardest hitters in the league.

This year, however, Taylor was allowed to play a true free safety position, using his speed and power to chase down passes and crush would-be receivers. His five interceptions tie for the league lead in the NFC, even though he missed the last two games because of a sprained knee.

"I just take this job very seriously," Taylor said in a rare group interview during training camp. "It's almost like, you play a kid's game for a king's ransom. And if you don't take it serious enough, eventually one day you're going to say, 'Oh, I could have done this, I could have done that.'

"So I just say, 'I'm healthy right now, I'm going into my fourth year, and why not do the best that I can?' And that's whatever it is, whether it's eating right or training myself right, whether it's studying harder, whatever I can do to better myself."