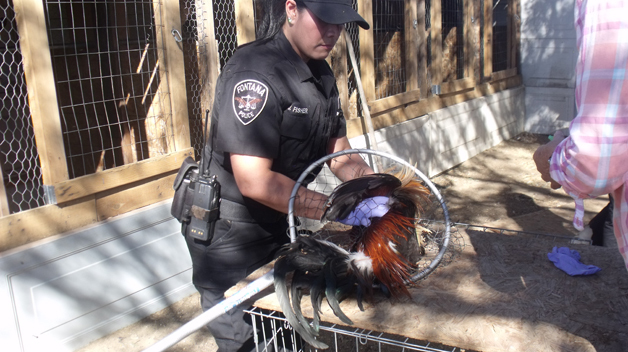 Investigators say they first received a tip that cockfighting was happening, then discovered several graphic Instagram videos showing roosters fighting to the death. It appeared the account was being used to promote breeding, training, selling and fighting of the animals, police say.

Cockfighting is illegal in all 50 states, and possession of fighting fowl and fighting paraphernalia is also illegal, according to the station.

A warrant was then served at a Fontana home, where officers found dozens of roosters -- many injured and sick, according to CBS Los Angeles. Police also reportedly found more than a dozen short knives and sparring muffs, used as implements on the animals.

The owner of the Instagram account, 21-year-old Antonio Alvarez, was arrested and charged with animal cruelty, according to the station. San Bernardino County Sheriff's jail records reportedly show he was released on bail Wednesday.