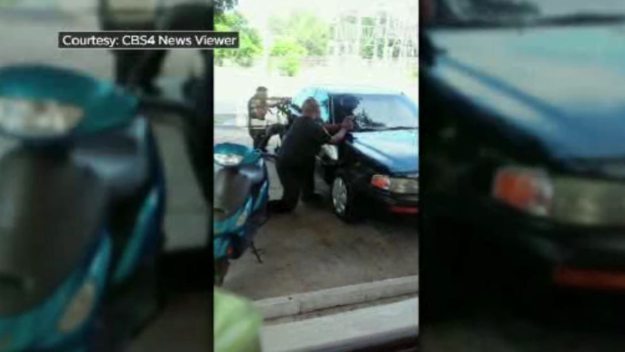 MIAMI -- Authorities say a Florida police officer shot and wounded an autistic man's caretaker following reports of a man threatening to shoot himself.

North Miami Assistant Police Chief Neal Cuevas told The Miami Herald that officers responded to the scene Monday to find 47-year-old Charles Kinsey, a therapist who works with people with disabilities, according to WSVN-TV, trying to get his 23-year-old patient back to a facility from where he wandered.

Cuevas said police ordered Kinsey and the patient, who was sitting in the street playing with a toy truck, to lie on the ground. Kinsey lies down and puts his hands up while trying to get his patient to comply. An officer then fired three times, striking Kinsey in the leg, Cuevas said. No weapon was found.

Kinsey's attorney, Hilton Napoleon, provided a cellphone video to the Herald on Wednesday taken moments before the shooting. It shows Kinsey lying in the middle of the street with his hands up, asking the officers not to shoot him, while the autistic man sits next to him, yelling at him to "shut up."

"Sir, there's no need for firearms," Kinsey said he told police before he was shot, according to the station. "It was so surprising. It was like a mosquito bite."

Kinsey is black. Police haven't released the name or race of the officer who shot him.

The Miami Herald posted video of the encounter on their website.

Circle of Brotherhood, a group of men who work together to perform acts of community service and crime prevention, are demanding answers after Kinsey, who is one their members, was shot.

The group had plans to gather Wednesday evening in front of the police department's headquarters to raise concerns about the shooting, CBS Miami reported.

"We found out bits and pieces and we're still finding things out," said friend Lyle Muhammad. "So we'd just like to go see him."

The Circle of Brotherhood said the North Miami Police Department is just the latest law enforcement agency to be called to task for the shooting of an unarmed black man.

They want answers and want the officer who shot Kinsey to be held accountable for criminal negligence.