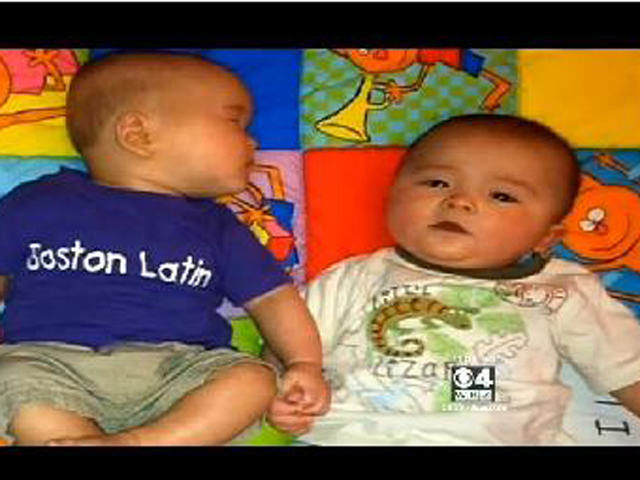 (CBS/AP) ARLINGTON, Mass. - A married couple and their infant twin sons, a week away from celebrating their first birthdays, were found dead at their home on Monday after police were called to check on them.

Authorities identified the dead as Scott Jones and his wife, Mei Kum Jones, both 43, and their sons, Colt and Cameron, who would've turned a year old on Nov. 26.

Details on how the family died have not been released, but the woman's brother told CBS Boston that the couple was going through a "nasty divorce," and that Scott Jones had recently moved out.

Arlington police Chief Frederick Ryan said police weren't looking for any suspects and there was no reason for the public to be alarmed.

An officer found the bodies in the two-family home at around noon on Monday after an au pair called police to check on them because she couldn't get into the home, according CBS Boston.

The home is located in a quiet residential neighborhood in Arlington, just northwest of Boston. It is not clear how long the bodies had been there.

Caroline Ronten, a former co-worker of Mei Jones, said her friend had seemed happily married when they reconnected last fall and Jones was pregnant with the twins.

Ronten said she never met Scott Jones but she and Mei Jones would chat when they crossed paths.

Neighbor Stephen Trebino, who grew up across the street from the couple's home, said he often saw one or the other of them walking with the babies. He said Scott Jones was nice to his father and would shovel the sidewalk without asking when it snowed.

"He was friendly," Trebino said. "He was always working on the house, always go, go, go."

Mei Kum Jones had worked for Road Scholar, an educational travel program formerly known as Elderhostel, which called her "a valued member of our team" and said her loss was "deeply felt by all of us."

"As we grieve together, we can only imagine the impossible loss Mei's family must bear, and our deepest sympathies are with them," it said in a statement.