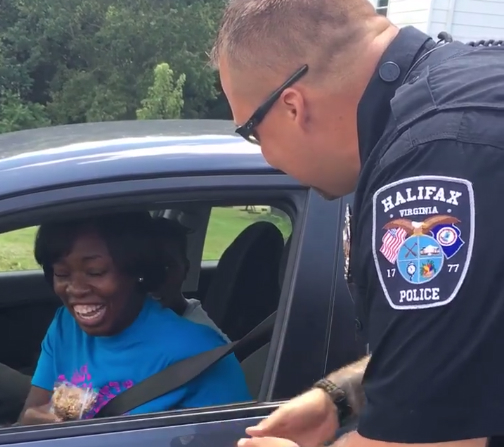 Drivers in Halifax, Virginia, were able to breathe a big sigh of relief over the weekend after they were pulled over by police on a hot summer day.

During seemingly routine traffic stops, Halifax Police Chief Kevin Lands and his partner officer Brian Warner informed half a dozen motorists that they were in violation of "vehicle code 1739."

The anxious drivers often gave the officers a blank stare or quietly shrugged when asked whether they understood why they were being stopped.

"It's actually against the law to drive on a hot day without an ice cream cone," joked Warner, as Lands videotaped one interaction which has since gone viral on Facebook with more than 4.5 million views.

Suddenly the blank stare on the driver's face melted into a broad smile.

"I was like 'Oh my God; I was not speeding,'" one driver responded, laughing, while officers handed her and a passenger ice cream.

The 94-degree heat inspired Lands and Warner to put some smiles on people's faces on Saturday. They handed out 16 cones in total.

"I hope that especially in today's climate people can see that cops are humans," Lands told CBS News. "We like to have fun."

This should actually come as no surprised to local residents. Lands said police perform acts of kindness all the time, but the good deeds don't always make it onto the internet.

"Myself and my department work very hard to be ingrained with the community," Lands explained. "We go to every event, every board meeting, officers attend local churches, shop and eat at local businesses; we're not just there for arrests and to hand out tickets."

Dozens of people commented on the police chief's post, thanking the officers for spreading some unexpected -- but much needed -- joy.

"Sweet job in more ways than one," one Facebook user commented.

"That was a 'cool' idea," another punned.

Lands said he posted the video because he thought his small group of friends would get a "kick out of it." He never thought it would be shared more than 25,000 times.

But he's glad it's spreading.

"All day long we do things like this," Lands said. "I hope people see that we are normal people too, and we're not against the public."