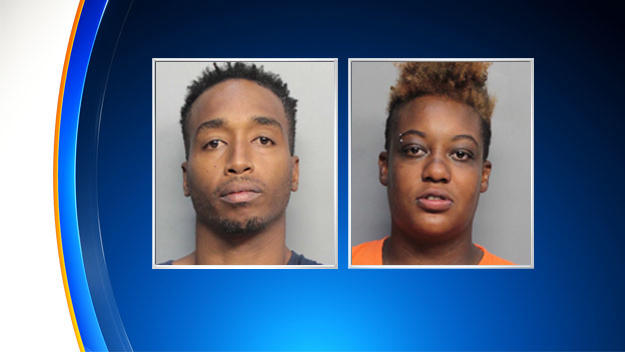 Miami-Dade Police said the 27-year-old victim had finished grocery shopping Sunday at a Publix supermarket in Hialeah, Florida. She got in her vehicle, reversed her car out of a parking space and was about to drive off when Rashada Horsley, 32, allegedly crossed in front of the car and approached the driver side door.

When the victim rolled her window down Horsley allegedly struck the side of her head, knocking her out. The victim later told police that when she awoke, she had been moved. Horsley was in the driver's seat and Horsley's husband, Timothy Lowe, 37, was also inside the car. The victim said Horsley began choking her while Lowe punched her in the face, eventually pushing her into the back seat and holding her down.

From there, the three allegedly drove to a Motel 6 in Miami, where the victim's credit card was used to rent a room.

Horsley used her Georgia driver's license to check in, an arrest report said.

At one point, however, the suspects became distracted and the woman was able to escape the room, she later told investigators.

Investigators said Lowe and Horsley fled in the woman's vehicle with her property.

A day later, Lowe and Horsley were arrested on unrelated charges for public nudity. The couple first walked into a Walgreens without any clothes on, police said, but didn't buy anything. Later, they entered a 7-11 and were accused of stealing two sodas. They were both charged with indecent exposure. Horsley was also given a petty theft charge.

Police then connected the couple to the woman's kidnapping.

In bond court Thursday morning, the judge noted that they were recently married and on their honeymoon.