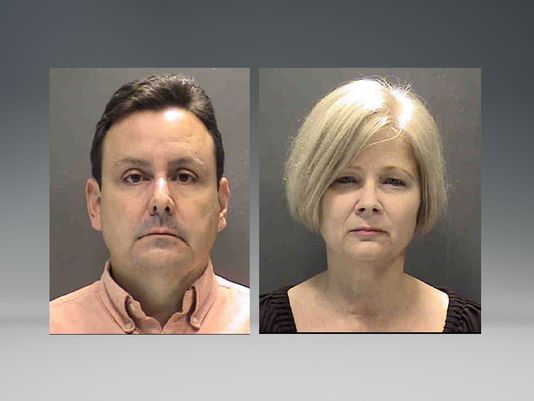 SARASOTA, Fla. -- A doctor and his attorney-wife have allegedly admitted to deputies that they would habitually tie up their adopted daughter and lock her in a playhouse for her own good, reports CBS affiliate WTSP.

Sarasota County Sheriff's Office deputies say on Dec. 27, the 12-year-old girl managed to escape, and made her way to a neighbor's house. That neighbor, 19-year-old Sean Macindoe, told WTSP the girl arrived at his door with her ankles and wrists zip tied.

Macindoe said the girl told him, "My parents abandoned me. I was left and ran away."

Deputies say the girl's parents -- Eugenio Erquiaga and his wife, Victoria -- would lock their adopted daughter inside the home's loft for hours in a 5-by-7 foot playhouse, which a detective described in an affidavit as a "glorified cage." They're each facing aggravated child abuse charges.

"She wasn't allowed to leave the playhouse to use the restroom. She'd have to do all that inside," says Sheriff's Lt. Joe Giasone.

Deputies say Erquiaga did report his daughter missing on Dec. 27. In a 911 call he described his daughter as emotionally disturbed. He said in the call that he had noticed her missing 15 to 20 minutes, and had been searching for her.

The couple's attorney Derek Byrd says the public should not be too quick to judge these parents.

"I'm certain any people in the public would say that's not the way they would handle it and they're entitled to their opinion," Byrd said. "The question is, is it criminal to handle a problematic child that way?"

The 12-year-old girl is one of three adopted children. The couple also has four biological kids all ranging from five to 13 years old. Deputies say none of the other children complained of abuse or neglect to the sheriff's office or the Department of Children and Families.

The other children are currently in the custody of the Florida Department of Children and Families, officials said.