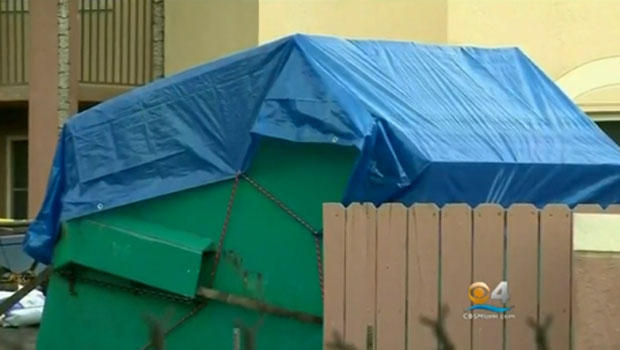 MIAMI -- A Florida woman faces a first-degree murder charge after her 4-year-old daughter's body was found in a dumpster.

A Miami-Dade Police statement says a man throwing out garbage Sunday found the body of Tania Paige inside the trash bin at his apartment complex southwest of Miami.

The girl's mother, 31-year-old Tina Farrington, was held without bond Monday at the Miami-Dade County jail on a first-degree murder charge.

"We send our deepest condolences and prayers to Officer Leon Paige and his family on the loss of his daughter," the Miami Beach Police Department said in a statement to CBS Miami. "We kindly request his privacy be respected during this very difficult time."

Police say Farrington gave a detailed confession of the murder once she was in police custody. According to an arrest report, Farrington admitted she suffocated Tania with a pillow on Halloween after becoming angry with the girl for "talking back."

Police said Farrington hid the girl's body in the trunk of her car until she noticed a foul odor five days later.

According to police, Farrington moved Tania's body early Sunday to the dumpster in her apartment complex.

That same day a man taking out his trash at the complex discovered the child's body wrapped in a blanket in the bin. He told another woman to call 911. She also saw the body wrapped in the blanket.

"Every time I close my eyes I can see her face," Indira Blanco told the station. "He asked me, 'Can you see if she's alive because you can do the CPR.' I said, 'Okay, let me see.' When I opened blanket, I said no, she was dead."

Blanco told the station the little girl had obvious trauma to her face.

"Whoever did it, I mean how could they do it? There's no excuse, there is no excuse to do that," Blanco said.

Dahriana Correa, who lives in the complex, told CBS Miami she thinks she may have seen Farrington putting her daughter's body in the dumpster.

"She backed up her car and everything and I was like, that's weird that she's backing up her car to throw away garbage," she said.

Florida Department of Children and Families said they had an investigation open in regards to Tania from 2016 that did not involve her mother. The investigation did not indicate there was abuse, according to DCF.

"We are disgusted and devastated by the death of this innocent girl. DCF has opened a child death investigation to review all circumstances that led to this tragedy and will assist police in any possible to hold anyone responsible accountable for this heinous act," the department said in a statement released to the station.

DCF says Taina's surviving sibling is being taken care of by relatives.

In bond court on Monday, a public defender, without elaborating, made mention of Farrington having possible 'mental issues.'