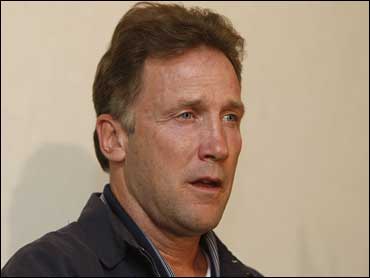 The allegations by Chris Broad were denied by Pakistani cricket and government officials, who pointed out that six police officers died in the attack Tuesday by up to 14 assailants toting assault rifles, grenades and at least one rocket launcher.

Officers said their manhunt Wednesday for the attackers was making little headway.

On Wednesday, new video from a surveillance camera broadcast on local TV showed several attackers apparently escaping along a deserted side street on motorcycles while carrying weapons. Three were also shown walking down the middle of the street, apparently in no hurry, indicating they did not believe police were in the area or hunting them down.

"There was not a sign of a policeman anywhere," Broad, the referee, said Wednesday after his arrival back in Britain. "They had clearly left the scene and left us to be sitting ducks." He did not say how long his van was stationary. Other witnesses described police and the gunmen trading fire for around 15 minutes during the attack, but at least one of the players said the gunmen appeared to fire at will.

"They were not under pressure ... nobody was firing at them," said team captain Mahela Jayawardene said.

The attack in the eastern city of Lahore came at a time of mounting political turmoil in the nuclear-armed country and added to fears it was losing the battle against Islamist extremists blamed for a series of high-profile attacks.

There are also concerns over whether Pakistani police will be able to bring the perpetrators to justice - underscored by conflicting accounts of the investigation offered Wednesday. One police official said several suspects had been taken into custody, though none of the gunmen was tracked down. Hours later, however, another official denied anyone had been arrested.

Broad was traveling in a van in the same convoy as the Sri Lankan team bus, which stopped for around 1½ minutes as gunfire rang out before speeding to the stadium.

His driver was killed and a fellow official was shot and critically injured.

Broad said Pakistani officials had promised "presidential-style security" but "it was not there when we needed it."

"How can Chris Broad say this when six policemen were killed?" Pakistan Cricket Board chief Ijaz Butt told The Associated Press. He declined further comment until he had a chance to speak to Broad.

The convoy transporting the Sri Lankan team and cricket officials was surrounded by police vehicles at the front, rear and side, and traveled the same route each day of the five-day test match against Pakistan's national team, according to officials.

Lahore police Chief Haji Habibur Rehman said police raided locations in Lahore and surrounding districts and arrested "some suspects." He gave no details of their alleged roles, or the precise number detained, but said some were picked up at a Lahore hostel, where bloodstained clothes were also found.

He added: "So far we have not made any headway toward the perpetrators."

Later, Salah ud Din Niazi, the officer in charge of the probe, told The Associated Press no arrests had been made and no one had been questioned.

None of the gunmen was killed, and all apparently escaped into this teeming city after a gunbattle with the convoy's security detail.

Pakistani police have a poor record of investigating terrorist attacks and often round up people in the immediate aftermath of assaults who are never charged, or release contradictory information.

Islamist militants are widely suspected in the attack, but authorities have not explicitly stated this.

"All the while bullets were being sprayed at our bus, people around me were shouting," he said.

But Jayawardene added that growing up in Sri Lanka, which has seen scores of terrorist attacks in the country's civil war, meant the players had a "natural instinct" that made them immediately hit the floor at the first sound of gunfire.

"We are used to hearing, seeing these things. Firing, bombings. So we ducked under our seats when the firing began," he told reporters.

The attack ended Pakistan's hopes of hosting international cricket teams - or any high-profile sports events - for months, if not years. Even before Tuesday, most squads chose not to tour the cricket-obsessed country for security reasons.

Pakistan has a web of militant networks, some with links to al Qaeda and the Taliban, which have staged other strikes in a bid to destabilize the government and punish it for its support of the U.S.-led invasion of neighboring Afghanistan.

One group likely to fall under suspicion is Lashkar-e-Taiba, the network blamed for the Nov. 26-28 Mumbai attacks, in which 10 gunmen targeted luxury hotels, a Jewish center and other sites, killing 164 people.

The group has been targeted by Pakistani authorities since then, and its stronghold is in eastern Pakistan.

"Lashkar-e-Taiba's foot soldiers may be involved in this attack," a Pakistani intelligence official in Lahore told CBS News' Farhan Bokhari on condition of anonymity.

The official said there was little evidence to suggest that the group's "high command" was involved in planning the attack, but added, "this attack has some resemblance to Lashkar-e-Taiba's tactics."

Western diplomats warned, however, that Pakistani officials would likely draw comparisons between the two attacks. The Indian government accused elements in Pakistan's intelligence services of having links to the Mumbai attackers - a charge repeatedly denied by Pakistan.

"The Pakistanis have said since Mumbai that they are as much victims of terrorism as anybody else. If they now say, 'it's the Lashkar,' we have to verify that independently," said a Western diplomat in Islamabad, who spoke to CBS News on condition of anonymity.