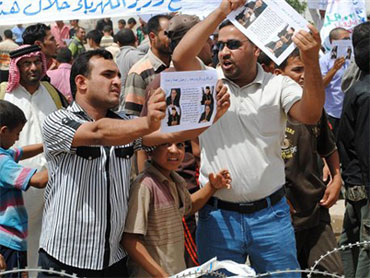 Iraq's electricity minister resigned Monday as the government scrambled to do damage control following a surge in angry protests over the lack of electricity despite years of promises the situation would improve.

The resignation of Karim Waheed came as frustration over the issue erupted over into violence, with two protesters killed when security forces opened fire to disperse a crowd this weekend in the oil hub of Basra. Riot police also used water cannons after demonstrators began pelting them with stones Monday in Nasiriyah, another mainly Shiite southern city.

The protest in the city of Nasiriyah came two days after a similar demonstration turned violent, with two people killed and two wounded after police opened fire in the southern oil hub of Basra.

The unrest has raised concerns that growing anger over the lack of basic services could jeopardize efforts to stabilize Iraq even as security improves.

The Iraqi public has become increasingly frustrated over the government's inability to provide power, clean water and other utilities even after the spending of billions of dollars in U.S. and Iraqi reconstruction money.

Iraqis have suffered for years with less than six hours per day of electricity, with many families paying more than $50 per month for private generators to make up for the frequent outages. The problem came to a head as temperatures have soared well above 110 degrees this summer.

Waheed said in a televised address that "the impatience of Iraqis about their suffering" would have been ended by a series of projects that would have fixed the shortages, but the issue has become politicized.

"So I announce with courage my resignation from my post as electricity minister," he said.

Frustration is high as rival factions jockey for influence amid stalled efforts to form a new government more than three months after national elections.

Many impoverished Iraqis in the south have been left without air conditioning or fans despite high humidity and summer temperatures that frequently rise above 110 degrees.

Calling for the resignation of Iraq's electricity minister and other officials, protesters threw rocks and wooden bars and scuffled with security forces as they tried to break through a security barrier protecting the local government compound in Nasiriyah, according to witnesses and officials.

Riot police carrying shields lined up behind waist-high red and yellow barriers and a row of barbed wire and sprayed the protesters with water cannons mounted on armored vehicles.

At least 14 policemen and four protesters were wounded in the melee, police said.

One officer said he was stunned when the protesters started throwing stones and hitting them with wooden bars.

"We were defending the provincial council building from the demonstrators who were trying to break in," he said from his hospital bed. "I have bruises on my hands and head."

Fearing another outburst, government troops stepped up security around other government buildings in the city.

Frustration has been heightened by the failure of Iraq's politicians to form a new government more than three months after parliamentary elections.

Some demonstrators carried chairs they said symbolized the bickering between political factions over government posts. They also bore kerosene lamps and effigies of private generators used to make up for the lack of electricity.

Dozens took to the streets in Nasiriyah on Sunday as well but the protest fizzled after several people were detained as authorities try to keep a lid on the tensions.

"We will continue these demonstrations till our demands are met," said Basil Sabah, 40, an employee in the government education directorate, who was taking part in the demonstration for the second day. "We call upon all Iraqi provinces to stage demonstrations in this electricity revolution."

Nasiriyah, 200 miles southeast of Baghdad, is a stronghold of followers of anti-U.S. cleric Muqtada al-Sadr and was the site of heavy clashes between Shiite militias and security forces in the past.

Electricity Ministry spokesman Musab al-Mudaris blamed the lack of power there on local officials and other government agencies. He declined to comment on demands for Electricity Minister Karim Waheed to step down.

Iraqis, meanwhile, buried the dead from Sunday's double suicide car bombing targeting a state-run bank in Baghdad, the second attack against a major financial institution in a week.

The 28 people killed included a family of four riding on a minibus that was caught up in the blasts as it drove by the bank. Ali al-Kurwi, a 33-year-old plumber from eastern Baghdad, his wife Shaima al-Rawi and their two young daughters Tabarak and Zainab were returning from visiting family when they were killed.

Relatives said al-Kurwi and his wife were Sunni but wanted to be buried in the main cemetery in the Shiite holy city of Najaf because of their reverence for Imam Ali, the cousin and son-in-law of the Prophet Muhammad.

His brother-in-law Abu Mohammed said the family was very poor but relatives had collected donations for their burial south of Baghdad.

"Ali asked me long ago me if he dies to be buried in Najaf," he said.