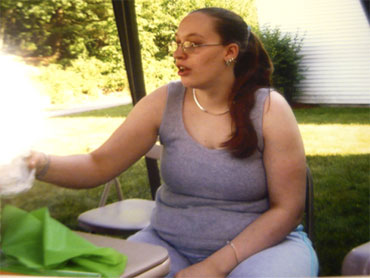 (AP/Family photo, via Boston Herald)
Family photo of Darlene Haynes, 23, who was found dead in a closet. Her unborn baby had been cut from her womb.

WORCESTER, Massachusetts (AP) A baby girl cut from her mother's womb was found and a woman arrested after acquaintances became suspicious of her claims that she had just given birth, police said.

The body of the girl's mother was found Monday in a closet at her Worcester apartment. It was not until an autopsy that authorities discovered the fetus was missing.

Julie Corey, 35, of Worcester, Massachusetts, and a male companion were arrested in Plymouth, New Hampshire, where police found them with the child. Corey was charged as a fugitive from justice and is to be arraigned Thursday in district court in Concord, New Hampshire. She was in custody and could not be reached for comment late Wednesday, and Worcester police did not know whether she had a lawyer. Police in New Hampshire said the man was released.

Corey told acquaintances she delivered the baby sometime late Thursday or early Friday at an undisclosed hospital, and by later Friday was showing the newborn off to acquaintances, police said.

"Some friends became a little concerned about how she got home so early after just giving birth," Hazelhurst said.

Police said Corey had reportedly gone to New Hampshire to relocate. A newspaper report said she arrived at a Plymouth homeless shelter Tuesday night. She told workers there that the girl was 6 days old and identified herself as the mother but had no information on the child, according to the Union Leader in New Hampshire.

Corey was arrested Wednesday as she tried to leave the shelter with the infant after workers alerted police and a nurse began photographing the baby with her cell phone, the report said.

The baby's mother, Darlene Haynes, was eight months pregnant. Her body was found by her landlord, William Thompson, who said a "horrifying smell" led him to her apartment, where he found her body wrapped in bedding in a closet. Her death was ruled a homicide.

"It's horrific," Thompson said Wednesday. "There's no words to describe what's going on in this building today."

The exact cause of Haynes' death has yet to be determined pending toxicology tests, but Worcester said the autopsy indicated Haynes suffered head injuries.

Police said the 23-year-old had apparently been dead for several days, and that she hadn't contacted family or friends since Thursday.

Haysha Toledo, a 17-year-old neighbor, said neighbors used to hear fighting from the apartment Haynes shared until recently with her boyfriend, Roberto Rodriguez.

"We used to hear her crying and screaming but no one ever really did anything," Toledo said, adding that neighbors did not want to get involved.

Haynes had a restraining order against Rodriguez, who allegedly pushed her into a glass table in June and cut her arm, then grabbed her by the throat and slapped her, according to court records. Court records also showed Rodriguez was charged with hitting Haynes in 2008 in a case that was continued without a finding.

In June, Haynes described the 24-year-old Rodriguez as her boyfriend of several years. Her landlord said Rodriguez moved out of the apartment last month.

Rodriguez was interviewed by authorities. He told WCVB-TV that Haynes was "a nice girl."

"She had her problems, you know, but nobody deserves to go (through) what she went through," he said.

Family members said she had three other children.

Her youngest, an 18-month-old girl, is in state custody, according to Department of Children and Families spokeswoman Alison Goodwin. Family members had been looking after her.

Karl Whitney, Haynes' uncle who is acting as a spokesman for the family, said Haynes' grandmother, Joanne Haynes, is raising the two other children, Jasmine, 5, and Lillian, 3.

He told the Telegram & Gazette that Haynes had picked the name Sheila Marie for her fourth child.