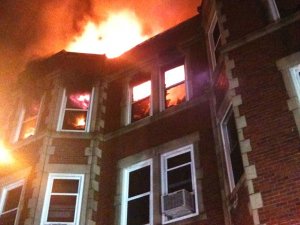 (CBS/WBZ/AP) BOSTON - Police say an explosion and a six-alarm fire at an apartment building in Boston early Monday may have been the result of a failed suicide attempt, according to a preliminary investigation.

Witnesses heard an explosion in the apartment building on Wardman Road just before the fire started around 1 a.m., reports CBS station WBZ.

Firefighters rescued at least 15 people, including a 6-year-old boy who was dropped from a third-floor window of a large apartment building in the city's Roxbury neighborhood.

Mohamed Abdul Jabar, 28, of Medford, was arrested after he showed up at Boston Medical Center with burns and reportedly claimed he started the fire by tampering with a gas line, police said.

Jabar was transferred to the burn unit at Massachusetts General Hospital, where he was being treated in intensive care with second-degree burns to his arms, hands and face. His injuries don't appear to be life-threatening, police said.

Jabar is expected to face a list of charges, including arson and attempted murder.

Ten people were taken to the hospital. Most  of them were suffering from smoke inhalation. Two firefighters and a police officer were also treated for minor injuries.

MacDonald said the widows and frame were blown out in one corner of the building and bricks littered the street. More than two dozen apartments were damaged or destroyed.

About 160 firefighters were called to the scene. A temporary shelter was set up for resident s displaced by the fire.