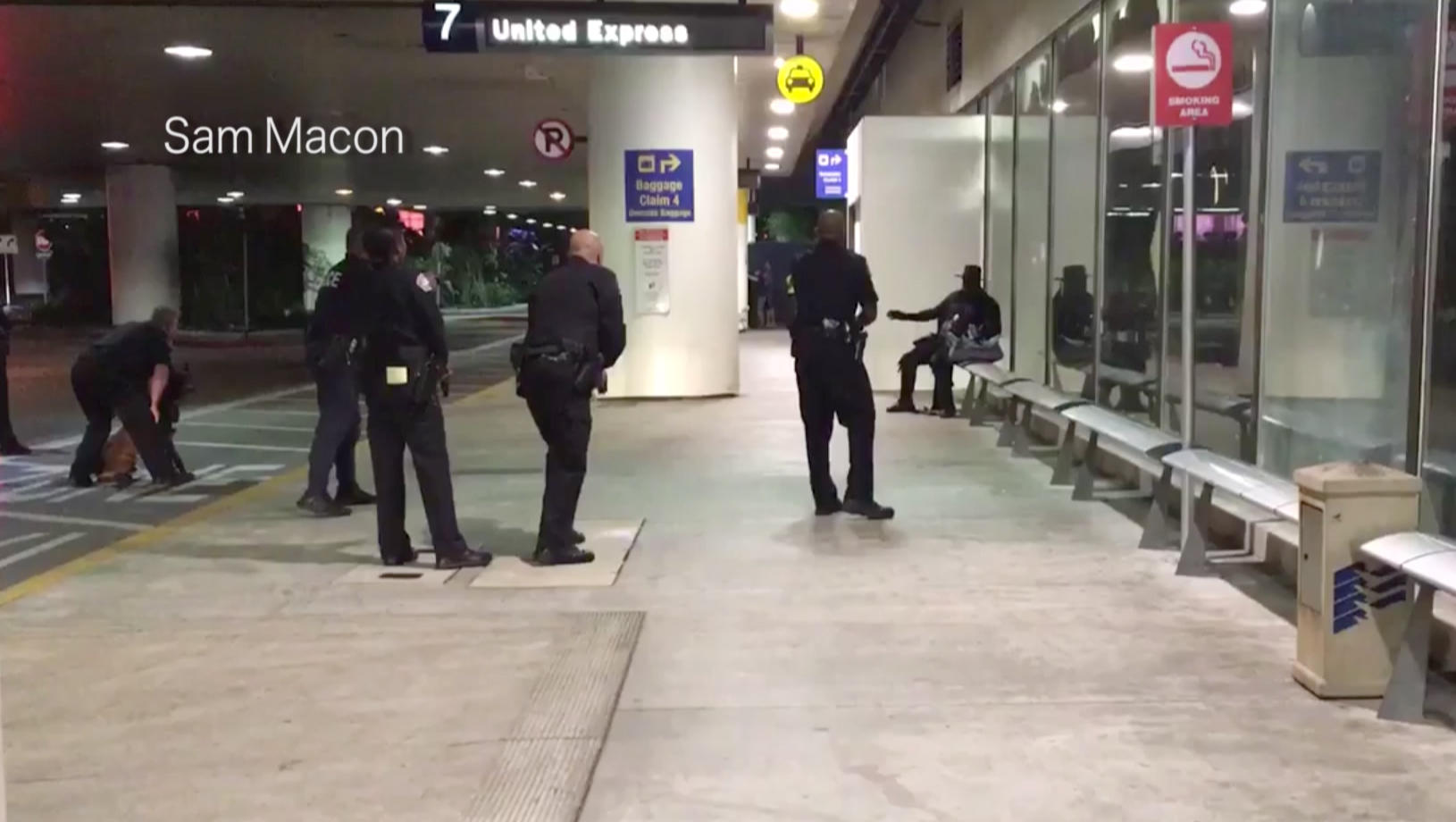 The sword turned out to be plastic. But soon after, hundreds of passengers raced onto streets or the tarmac, causing major flight delays that the airport was still recovering from Monday.

Video shows at least six officers confronting the man, who was dressed as the fictional crime fighter Zorro, outside Terminal 7 around 8:40 p.m. Sunday.

Officers with rifles stormed the airport but uncovered no evidence of a gunman or shots fired.

It’s similar to a false alarm that led to a panicked evacuation two weeks ago at Kennedy Airport in New York, when a boisterous celebration of the Olympics may have been misinterpreted as gunfire, authorities say.

The Los Angeles scare created a mess, with three terminals shut down, roads closed and flights held in the air and on the ground, but no reported injuries. About 280 flights were delayed, while at least 27 flights were diverted to other airports and two were canceled, airport spokeswoman Nancy Castles said.

Vehicle traffic was flowing again on the upper departure level during morning rush hour, but cars backed up on the lower arrival area, Castles said.

CBS2’s Greg Mills reported departure and arrival roadways into the Central Terminal Area have reopened, and operations appear to be moving normally at LAX.

Besides traffic, travelers faced a massive backup in security lines because those who fled had to be rescreened through security.

“We were on the jetway, and someone starts pushing behind us,” Jon Landis, a sales representative from Boston who was boarding a flight home, told The Associated Press. “One man was frantic, saying there was a shooter.”

Police officers, including one with a shotgun, eventually led passengers out of the terminal, through a security gate and into a parking lot, where several hundred people waited. Ninety minutes after the scare, Landis said he was still waiting for word on his flight.

Scott McDonald said he was getting off a plane in the middle of the chaos and the crew told him to get back on. Looking out the window, he said he could see many evacuees gathered on the tarmac, a strange sight even for someone who travels constantly.

Douglas Lee, who was traveling home to Albuquerque, New Mexico, with his wife and son, said the greatest danger was being trampled.

“You can imagine hundreds of adults trying to go through an exit door,” he said.

At one point, he picked up his young son and left their luggage. Abandoned bags littered sidewalks as people fled.

Corey Rosenbusch was relaxing inside a terminal club during a layover between his home in Washington, D.C., and Sydney when the lights went off and the staff told everyone to shelter in place.

“People immediately started looking at social media, where they saw reports that there was an active shooter,” Rosenbusch told the AP.

He said several officers, including some with assault rifles, led the group out of the area.

The false alarm comes as police investigate whether a raucous celebration Aug. 14 at JFK airport led to noises people believed were shots, with the ensuing chain reaction turning into a panic as crowds ran to evacuate.

The Los Angeles airport had an actual shooting in November 2013, when a man opened fire in the terminal, killing a security agent and wounding three other people.