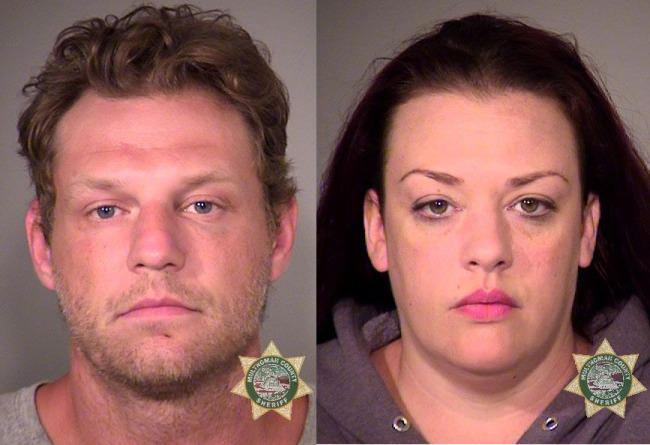 PORTLAND, Ore. -- An Oregon man and his girlfriend accused of intentionally running down a black teen after an altercation in a convenience store parking lot face new hate crime charges alleging they targeted the victim because of his race.

According to the indictment, which was first obtained by CBS affiliate KOIN, Courtier and Hunt acted together and based on “their perception of the race and color of Larnell Burce [did] intentionally cause physical injury to Larnell Bruce.”

Under Oregon law, a charge of intimidation means the defendants are accused of acting based on their perception of the victim’s race, color, religion or disability.

The two had previously pleaded not guilty to a charge of murder in the death of 19-year-old Bruce, of Vancouver, Washington.

Last month, The Portland Mercury raised questions about Courtier’s possible affiliation with a white supremacist group after finding pictures on his Facebook page that show him with a tattoo of “EK,” which stands for European Kindred. At the time, authorities had not charged him or Hunt with a hate crime, but were investigating.

Gresham police said Tuesday the defendants’ “clear ties” to a white supremacist gang were initially not enough to charge them with a hate crime.

“Anything like this, we have to be very careful in looking at motive before we just assume something that may seem very clear to other people,” said Officer John Rasmussen, a spokesman for the Gresham police. “We have to be sure to tie it in correctly to where it could withstand a court trial.”

Additional investigation, including more witness interviews and input from experts on white supremacists, led a grand jury to re-indict the couple Monday.

Attorneys for Courtier and Hunt did not return phone calls Tuesday.

According to court documents, Bruce and Courtier got into an argument that turned physical outside a Gresham 7-Eleven on Aug. 10. Bruce was armed with a machete.

It still isn’t clear what the two were fighting about, but moments later Courtier jumped in his 1991 Jeep Wrangler and chased down Bruce as the teen ducked and wove through the parking lot on foot, according to an affidavit for probable cause. Surveillance video shows the Jeep turning around rapidly and accelerating toward Bruce as he tries to flee.

The video did not capture the moment Bruce was struck, the affidavit said, but a responding officer found him unconscious on the ground with blood streaming from his head and ears. The officer also spotted a red Jeep speeding away.

Hunt shouted “Get him, baby, get him” during the fight, but has denied any involvement in Bruce’s death, according to court papers.