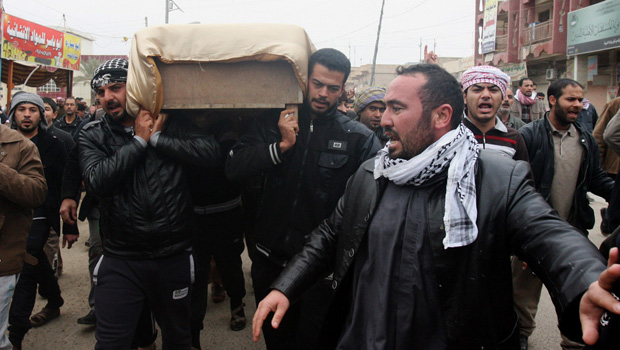 BAGHDAD - The city center of Iraq's Fallujah has fallen completely into the hands of fighters from the al Qaeda-linked Islamic State in Iraq and Levant, police said Saturday, yet another victory for the hardline group that has made waves across the region in recent days.

The group is also one of the strongest rebel units in Syria, where it has imposed a strict version of Islamic law in territories it holds and kidnapped and killed anyone it deems critical of its rule. Also on Saturday, it claimed responsibility for a suicide car bombing in a Shiite-dominated neighborhood in Lebanon.

Hadi Razeij, head of the Anbar province police force, said police had left the city center entirely and had positioned themselves on the edge of town.

"The walls of the city are in the hands of the police force, but the people of Fallujah are the prisoners of ISIL," he said, speaking on Arabic language satellite broadcaster al-Arabiya.

Fallujah, along with the capital of Anbar province, Ramadi, was a stronghold of Sunni insurgents during the U.S.-led war. Al Qaeda militants largely took both cities over last week and have been fending off incursions by government forces there since.

In a speech in Baghdad, Prime Minister Nouri al-Maliki said government forces would press on to clear the province of militants.

"There will be no retreat until we eliminate this gang and rid the people of Anbar of their evil acts," he said. "The people of Anbar asked the government for help, they called us to come to rescue them from terrorists."

Dozens of families were fleeing Fallujah, sheltering in schools in nearby towns, provincial official Dari al-Rishawi told The Associated Press. It appeared that there was a shortage of fuel inside the city and that food prices had doubled because supplies could no longer enter.

Hundreds of fighters from the Islamic State in Iraq and Levant were in the city, he added, mostly armed with heavy mounted machine guns, rocket-propelled grenades and mortars. On Saturday, Sunni tribesmen seeking to push out the group had yet to enter the city.

The U.S. State Department expressed its concern in a statement, saying it would continue to work with Iraqi authorities and tribes allied against the group "to defeat our common enemy."

"We are also in contact with tribal leaders from Anbar province who are showing great courage as they fight to eject these terrorist groups from their cities," Deputy Spokesperson Marie Harf said.

Government troops, backed by Sunni tribesmen who oppose al Qaeda, have encircled Fallujah for several days, and have entered parts of Ramadi. On Friday, troops bombarded militant positions outside Fallujah with artillery, a military official said, speaking on condition of anonymity as he was not authorized to release information.

Anbar province, a vast desert area on the borders with Syria and Jordan with an almost entirely Sunni population, was the heartland of the Sunni insurgency that rose up against American troops and the Iraqi government after the 2003 U.S.-led invasion that toppled Saddam Hussein. The insurgency was fueled by anger over the dislodgment of their community from power during Saddam's rule and the rise of Shiites. It was then that al Qaeda established its branch in the country.

Fallujah became notorious among Americans when insurgents in 2004 killed four American security contractors and hung their burned bodies from a bridge. It, Ramadi and other cities remained battlegrounds for the following years, as sectarian bloodshed mounted, with Shiite militias killing Sunnis.

In the end however local tribes managed to defeat the insurgents and the area had been calm for several years.