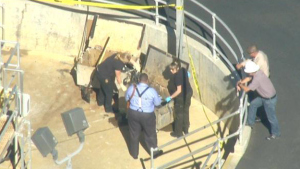 LOS ANGELES- Authorities have identified a woman whose body parts were found at two Los Angeles County water treatment plants, but there is still no word on how she died.


The remains are those of Erin Lynn Cruz, 27, who lived in the East San Gabriel Valley, according to a Sheriff's Department statement.

Cruz was last seen alive on the evening of Oct. 23 in the La Puente area east of Los Angeles.

The remains were discovered in bins that hold debris separated from sewage waste water.

Her left arm was found at the Carson plant Oct. 31.

Investigators said Cruz's body may have been dumped into a manhole in the San Gabriel Valley, made its way down a sewer line, and been pulled apart by a pump before the wastewater was distributed to the treatment plants.

The cause of Cruz's death had not been determined, but homicide detectives are investigating.

CBS Los Angeles reports that the LAPD is asking those who might have seen Cruz after Oct. 23 to contact them.