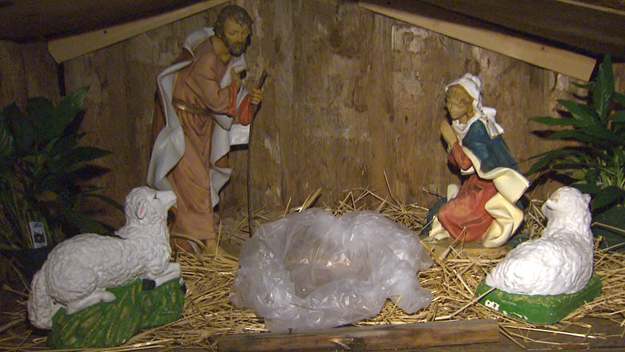 HAVERHILL, Mass. -- A mayor in Massachusetts is outraged that someone stole a baby Jesus statue from a church's Nativity scene and replaced it with a freshly decapitated pig's head, according to news reports.

Haverhill Mayor James Fiorentini says the desecration has "all the elements of a hate crime." Police say the perpetrator could also face animal cruelty charges.

The parish priest noticed the statue had been taken from the creche at Sacred Hearts Roman Catholic Church on Christmas morning.

Police say the pig's head left in its place appears to have been recently severed and doesn't appear to have come from a butcher shop. Investigators are now seeking help from the public, reports CBS Boston.

Meanwhile, a neighbor replaced the baby Jesus with one from her own creche.

"I can't change the world, but I can change my city," Brenda Burns told the station. "I'm bringing this, and I'm asking everybody to do the same. Make a statement. You don't have to come here and hold a sign to be destructive. Just come to let everybody who drives by know. Not here. Not my city."

The baby Jesus figurine was also stolen from the Nativity scene on the Greenfield Town Common, in a Massachusetts community nearly 100 miles away, likely before dawn on Christmas Eve.