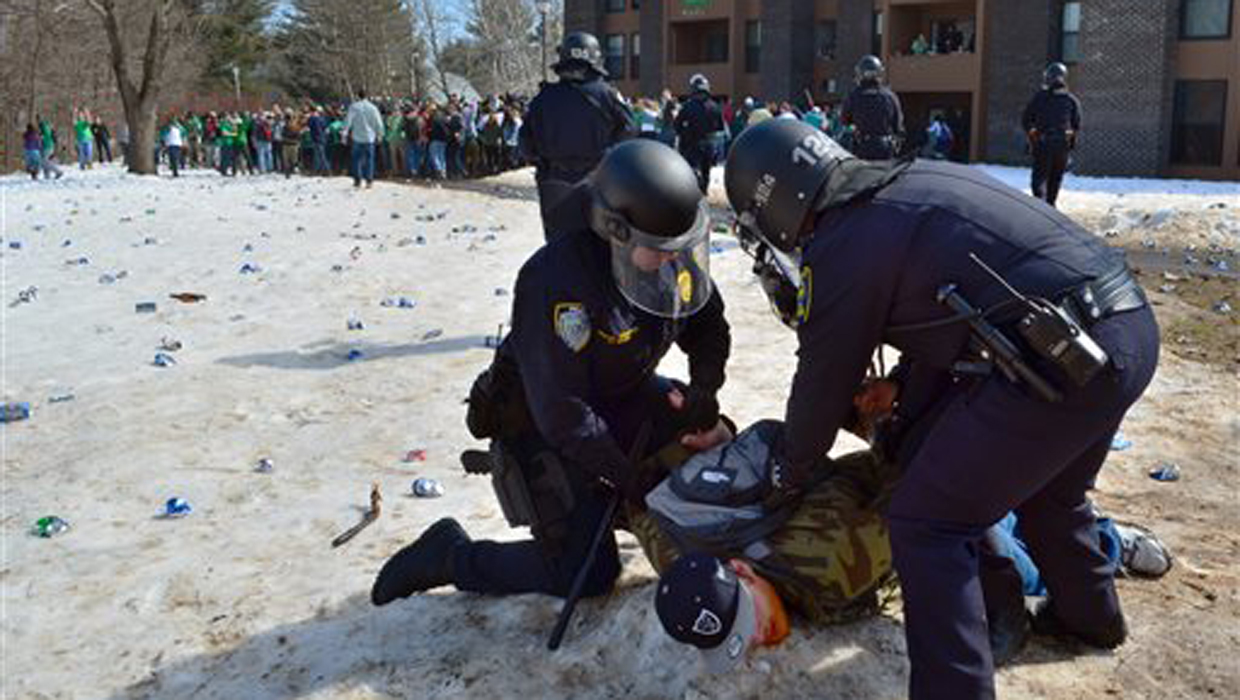 AMHERST, Mass. - A pre-St. Patrick's Day celebration near the flagship campus of the University of Massachusetts on Saturday spiraled out of control, pitting police in riot gear against thousands of drunken and unruly revelers at the annual "Blarney Blowout." There were more than 70 arrests and four officers were injured in the clashes that included some students throwing beer bottles, cans and snowballs, officials said.

Amherst police said early Sunday that a total of 73 people had been arrested after authorities spent most of the day Saturday attempting to disperse several large gatherings around the UMass campus for the party traditionally held the Saturday before spring break. The partying carried on through Saturday evening into early Sunday, and Amherst Police Capt. Jennifer Gundersen said in a statement that police were busy with numerous reports of fights, noise and highly-intoxicated individuals.

"Perhaps one of the worst scenes we have ever had with drunkenness and unruliness," Gundersen told The Republican in Springfield. "It is extremely upsetting. It is very dangerous."

UMass denounced the "unruly behavior" Saturday and spokesman Ed Blaguszewski said students who were arrested will be reviewed under the school's code of conduct and that sanctions could include suspension or expulsion.

UMass Chancellor Kumble Subbaswamy said in a statement Sunday it is "unequivocally clear that the University of Massachusetts Amherst condemns the outrageous behavior of those students who acted out without any regard for public safety and the community in which they live."

The size and scope of the gatherings have led to violence and fights, injuries, severe alcohol intoxication, sexual assaults, excessive noise, property damage, and violence toward the police and community members, police said.

Most of the arrests came at an off-campus apartment complex, where large crowds began gathering Saturday morning for the annual event, which was started by bars to allow the students to celebrate the holiday before their spring break begins this week.

Police from the city, university and state troopers in riot gear converged on a crowd of about 4,000 people at an apartment complex shortly after noon, police said. Authorities said there were acts of destruction of property and, as officers began to disperse the crowd, they were pelted with glass bottles, beer cans and snowballs.

After quieting the disturbance at the apartment complex, several thousand people assembled near a frat house. That gathering became dangerous and out of control, officials said, and when officers tried to clear the crowd they again faced people throwing bottles, rocks, cans and snowballs.

Police say pepper spray was used to disperse the crowd because of the size and "assaultive behavior."

Three officers were hurt when they were hit by bottles and one was injured while attempting to make an arrest, Gundersen said. None of the injuries required serious treatment.

Police say charges ranged from inciting to riot and failing to disperse to disorderly conduct, liquor law violations and assault and battery on officers. They said early Sunday some of those arrested had been released on bail, while others were held, depending on charges.

The university had warned students earlier this week that police would have an increased presence around town Saturday, especially after several people were arrested at last year's "Blarney Blowout." Letters were also sent directly to students disciplined in the last year for alcohol-related misconduct.

"This can't be in any way, shape or form be characterized as a party," he said. "This is destruction of property (and) assaultive behavior."

Collecting bottles and cans around the scene of the mayhem Saturday night, Amherst resident Raul Colon told the Gazette that the day's events looked like "a revolution, like in the countries that have revolutions between the students and the government."

Gundersen said that numerous participants in the revelry were also injured.

Other colleges across the country have gone on high alert around St. Patrick's Day to deal with alcohol-fueled students. At Penn State, the school paid licensed liquor establishments to stay closed this month during the unofficial drinking holiday known as State Patty's Day for the second year in a row.

State College, Pa., police Chief Tom King said that the strategy, along with a fraternity ban on parties, helped lead to a 75 percent decrease in arrests and citations this year compared to 2011 - the fake holiday's heyday.