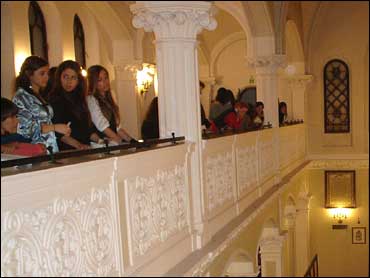 This story was written by CBS News producer Amy Guttman for CBSNews.com.

While Jews around the world celebrate Hanukah, recounting it's tale of everlasting light, another story of endurance is being written in Poland.

Numbering almost half a million, Warsaw was once home to the world's biggest Jewish community outside of New York.

The Nazis all but eradicated them during the holocaust, despite rebellion attempts by the Polish Army and, later, the Jews sequestered to the ghettos. Those who did survive were forced by a Communist regime to abandon or disguise their religion.

Now, more than 60 years later, a new Polish Jewish congregation is rekindling its faith in a wondrous way, with the help of an American Rabbi.

"We're now finding there are thousands and thousands of Poles who are now discovering they have Jewish roots," says Rabbi Michael Schudrich.

There is a whole crop of 20 or 30-somethings actively researching and reclaiming their pasts, and Rabbi Schudrich is happy to help them navigate the new faith.

"It's really the story of re-discovering identity. It's the story of what democracy means to an individual," says Schudrich.

For some, the discovery of Jewish roots is life-changing. One extreme story is that of 31-year old Pawel, who was baptized and raised Catholic, with church-going parents.

He spent years as an anti-Semitic skinhead. Six years ago, Pawel learned he was actually Jewish. He was so moved by the news that he not only abandoned his racist views, but also became a practicing, Orthodox member of the synagogue.

He works in the kitchen of a local kosher restaurant, and, together with his wife, Pawel is raising a Jewish family. His parents don't want to return to Judaism themselves, but are pleased Pawel has embraced the once-hidden family history.

Other "new Jews" include Mati Pawlak, who learned he was Jewish as a teenager. He went on to become Poland's first native Rabbi in forty years.

Pawlak has seen the local Jewish community shift from an ageing and elderly congregation, to a young, vibrant group. Just three years ago, there were 250 members of Warsaw's 19th century Nozyk Synagogue. Most were at least 70 years old.

Today, more than 500 members pray in the same sanctuary where their persecuted ancestors gathered. With an average age of 45, and a school full of children, the congregation, says Pawlak, is a symbol of survival.

"I met many holocaust survivors. For many of them it was something they lived through, it was worth it just to see this," said Pawlak.

Schudrich agrees that the story of Poland's "new Jews" is the ultimate story of hope. "In the most horrible destruction, you're going to end up finding also the greatest re-birth."
By Amy Guttman