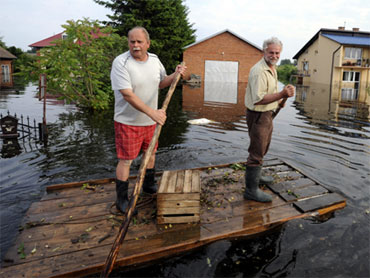 The city of Warsaw closed schools and a major road Tuesday as a new wave of flooding moved northward up the Vistula River.

The government of Prime Minister Donald Tusk announced a program to help flood victims. It offered no-interest loans to business owners whose companies suffered losses and absenteeism from the flooding. It promised to create jobs cleaning and repairing flood damage across the country.

Overnight Monday, the Vistula River broke its banks and flooded Janowiec, a quaint village with castle ruins not far from the historic town of Kazimierz Dolny and the city of Lublin.

Dikes were leaking and giving in at a number of other places along the river, as well.

Water levels remained very high in Warsaw following flooding in May. It was expected to rise further through Wednesday, amid fears over whether the weakened dikes would hold.

The flooding in May killed 20 people and destroyed many homes and vast stretches of farmland.

After massive flooding inundated Beata Wicha's one-story wooden house, she and her family of farmers salvaged what they could, carrying waterlogged furniture outdoors to dry in the sun.

But a new wave of floods struck this weekend, washing it all away and leaving the family nothing left to salvage.

"Now we don't even know where the furniture is - the water took it all," the devastated 22-year-old said Monday. "All we have left is our car."

She and her parents and two siblings - who are sleeping in their car at night - are among hundreds of Poles to have their lives turned upside down by heavy flooding twice in less than a month after new rainfall.

In Wilkow on Monday, flood waters up to 10 feet deep were located as far as 3 miles from the banks of the local river.

"This is a huge human tragedy. What people managed to save after the first wave, they've lost now," Miroslaw Statek, a firefighter commander in Wildow, said Monday. "They'll have to start their lives from scratch. Just like people in the U.S. after Hurricane Katrina."

Statek was among the many firefighters, local people and even prison inmates who worked frantically Monday to reinforce a dike in the village of Wilkow in central Poland - a drama playing out in many communities across the country's center and south as waters rise and heavy rain clouds threaten more misery.

Among those fighting to save their homes was Henryk Rybicki, a 61-year-old who works in Germany but rushed home to Wilkow, where dikes are at risk of breaking.

Rybicki said that if they give way, his house will be among the first to be flooded. He carried possessions to the upper floor of his family home and helped pile up sandbags to reinforce dikes along the Chodelka River, a small tributary of the large Vistula River.

Rybicki is among the many flood-stricken people venting at the country's leaders for not investing more money in flood protection.

"The government is privatizing industries, but where is all that money? They are selling Poland away but there is no money to protect us," Rybicki said.

Nearby, another resident, Tomek Kozak, 32, said the ground floor of his home is totally immersed in water for the second time, but he left his mother and younger sister on the top floor to protect the property from looters. The new flooding set back an already grueling effort to clean up after the last floods.

"There was a terrible stench. I had to clear away destroyed floors and you vomit every five minutes because the stench is so terrible," Kozak said. "I don't believe this house can be lived in. I don't know what to do next."