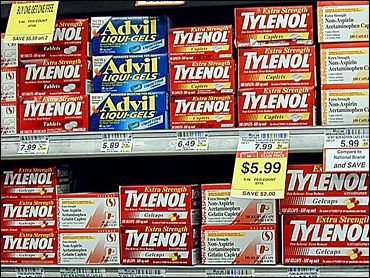 Use it correctly and acetaminophen, best known by the Tylenol brand, lives up to its reputation as one of the safest painkillers. It's taken by some 100 million people a year, and liver damage occurs in only a small fraction of users.

But it is damage that can kill or require a liver transplant, damage that frustrated liver specialists insist should be avoidable.

The problem comes when people don't follow dosing instructions, or unwittingly take too much, not realizing acetaminophen is in hundreds of products, from the over-the-counter remedies Theraflu and Excedrin to the prescription narcotics Vicodin and Percocet.

"The argument that it's the safest sort of has overruled the idea that people cannot take any amount they feel like," says Dr. William Lee of the University of Texas Southwestern Medical Center, who laments that acetaminophen is popped like M&Ms.

Just a doubling of the maximum daily dose can be enough to kill, warns Dr. Anne Larson of the University of Washington Medical Center.

The Food and Drug Administration has long wrestled with the liver risk, warning two years ago that more than 56,000 emergency-room visits a year are due to acetaminophen overdoses and that 100 people die annually from unintentionally taking too much.

A study published this month by Larson and Lee has agency officials weighing whether to revisit the issue.

Over six years, researchers tracked 662 consecutive patients in acute liver failure who were treated at 22 transplant centers. (Acute liver failure is the most severe type, developing over days, unlike chronic liver failure that can simmer for years because of alcohol abuse or viral hepatitis.)

Almost half were acetaminophen-related. More remarkable was the steady increase: Acetaminophen was to blame for 28 percent of the liver poisonings in 1998, but caused 51 percent of cases in 2003.

That makes acetaminophen the most common cause of acute liver failure, the researchers report in the journal Hepatology.

While most patients pulled through with intensive care, 74 died and 23 others received a transplant.

Some 44 percent of the cases were suicide attempts.

But more, 48 percent, were unintentional overdoses, which "isn't hard to do," Larson says.

Say you take Tylenol Cold & Flu Severe for the flu's aches and stuffiness, 1,000 mg of acetaminophen, every six hours. A headache still nags so between doses you pop some Excedrin, 500 mg more of acetaminophen. Switch to Nyquil Cold/Flu at bedtime, another 1,000 mg.

Depending on how often they're taken, the total acetaminophen can add up fast.

That's the nonprescription realm. Surprisingly, 63 percent of unintentional overdoses involved narcotics like Vicodin and Percocet that contain from 325 mg to 750 mg of acetaminophen inside each pill.

Some were chronic pain sufferers taking more and more narcotics as their bodies adjusted to the powerful painkillers, not knowing they were getting ever-higher acetaminophen at the same time. Or they added over-the-counter products for other complaints.

Just this month, Larson treated an 18-year-old whose liver crashed after using Vicodin for three or four days for car-crash injuries. "She was just taking too much because her pain was bothering her."

McNeil also runs ads about the risk, saying "if you're not going to read the label, then don't buy our products," says spokeswoman Kathy Fallon.

But how strongly labels warn varies by product. A rule to standardize warnings, urged by the Food and Drug Administration's scientific advisers in 2002, still is working its way through the agency.

Lee wants to copy Britain, which saw a 30 percent drop in severe liver poisonings after restricting how much acetaminophen could be bought at once.

That's unlikely. Meanwhile, the advice is simple: Read drug labels and add up all your acetaminophen, avoiding more 4,000 mg a day. For extra safety, Lee advises no more than 2,000 to 3,000 mg for more vulnerable people, who regularly use alcohol or have hepatitis.