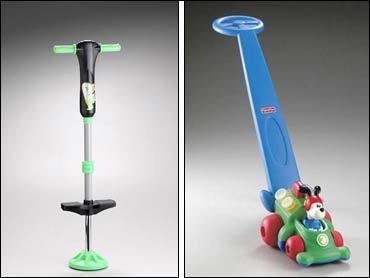 The pogo sticks can jam in the down position, then suddenly release, creating a risk of falls. The culprit is a faulty pin.

Green pogo sticks manufactured after Aug. 1, 2004, are not included in the recall and have a round, green sticker underneath the foot peg.

The push toys have an opening at the top of the handle where a child's chin can get stuck, causing injuries to the jaw and teeth.

The toys, made in Mexico, have a blue handle that attaches to a green race car with red wheels and the number three stamped on its front. A dog with a helmet is in the driver's seat. The recalled model number is B0335, which can be found stamped on the underside of the car.

Consumers are urged to stop using the toys and contact Fisher-Price by calling 800-991-2444. The company will provide a repair kit for the push toys, and the pogo sticks will be replaced.