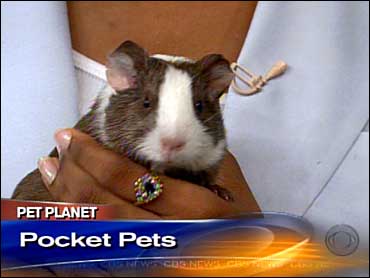 Maybe you aren't a fan of walking a dog several times a day. Perhaps you are allergic to cats. Don't despair. You might be the perfect candidate for a pocket pet.

Pocket pets are those furry, four-legged creatures that people commonly keep as pets that include gerbils, hamsters, guinea pigs, and rabbits. Resident veterinarian Dr. Debbye Turner brought a few of these animals by The Early Show Friday.

The moniker "pocket pets" comes from the size of the animals, and, of course, their ability to fit in one's pocket. Many people prefer these animals as pets because they take up less space, require less food, make less mess, and need less training than a dog or cat.

Pocket pets are great for apartment dwellers, children (with proper adult supervision), or families that have limited space.

Don't be fooled, though. These little guys will require some special attention. Their diets are highly specialized. Their housing needs frequent cleaning. And pocket pets, by virtue of their size, require a gentle touch.

All pocket pets require a unique cage. Keep them on shredded paper or hardwood. Do not use cedar shavings or pine shavings as they could cause respiratory problems.

Turner emphasized that pocket pets are not meant for small children. These animals' health and lives could be endangered by a child squeezing one too tightly.

If you are considering adding a pocket pet to your family, keep in mind one of the three animals that Turner brought to The Early Show: a hamster, a guinea pig or a mouse.

These small critters generally live 18 months to two years and are the most common type of pet kept in the U.S.

Hamsters are the least friendly of the pocket pets, as they are very solitary.

"You should only have one," Turner said, "because two will fight each other. And they don't necessarily like to be handled."

Hamsters are nocturnal and will bite you if you wake them.

In addition to their specialized food, they should receive fresh water daily, preferably in a drip container.

Don't forget to put a wheel in your hamster's cage. Hamsters really get around in the wild, so an exercise wheel will really help them use that extra energy. They should be kept in a container made of glass or very hard plastic (so they can't chew it), open at the top, with walls too high for them to climb out.

For a more social animal that will live for several years, you should add a guinea pig (or two) to your family.

If you plan on getting two or more guinea pigs, Turner warns that you will want to get same-sex animals. Otherwise, you could wake up and find a litter of guinea pigs in the creatures' cage.

Everyone's favorite rodent, the mouse, is growing in popularity.

Mice, which live anywhere from 18 months to three years are nocturnal, which means they are most active at night. And plenty of toys to keep them busy. They will run on a wheel for hours.

Mice are very social and best kept in pairs. But a female pair is ideal. Males can be aggressive and territorial toward one another. Also, unless you want an army of mice in a short period of time, it is not recommended to have a male-female pair.

And don't be fooled. These animals are smart.

"Mice are very intelligent and very curious and they will bond with you," Turner said.

Animals used in the segment were provided by Petco (http://petco.com).