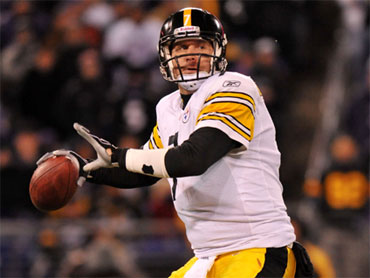 There's something about the Pittsburgh Steelers that's hard to resist. Their offense is off, their quarterback is hurt and they have trouble putting opponents away.

Yet they find ways to win, and they win so much that they're on top of the AFC North and in perfect position to gain one of two conference byes for the playoffs.

Important? You bet. First, the Steelers could use the time off to get some of their wounded players healthy. More important, it puts them - not Baltimore - in position to be home for the divisional round of the postseason, and if you don't think that's critical, you must not be familiar with the Ravens' history.

Until Sunday, they had won all their home games this season, their past eight dating back to last season, and 12 of their past 14. Another one Sunday, and they would set a franchise record for consecutive home victories.

But then Pittsburgh came to town, walked off with a come-from-behind 13-10 victory, and - kaboom! Just like that - it's Pittsburgh, not Baltimore, that's the team to beat in the division.

"We control our own destiny," wide receiver Hines Ward said.

And that is good. Had they lost Sunday, the Steelers would have moved a game behind the Ravens in the standings but a game-and-a-half down in the playoff picture; they would lose the head-to-head tiebreaker with the Ravens. But they didn't lose, and they didn't lose because their biggest playmakers - safety Troy Polamalu and quarterback Ben Roethlisberger - wouldn't let them.

It was Polamalu who forced the fumble that put Pittsburgh in position to win the game, and it was Roethlisberger who took over from there - making the necessary plays to clinch a huge victory.

First, he fought off a sure sack by onrushing linebacker Terrell Suggs, somehow getting rid of the ball with his right hand after he held off Suggs with his left. Then, he found reserve running back Isaac Redman over the middle on a third-down pass that turned into the winning touchdown, and tell me you haven't seen that before.

The foot you know about. Roethlisberger this weekend confirmed reports that he aggravated a broken bone in his foot, and he played Sunday with his right shoe heavily bandaged. The injury seemed to bother him, with the quarterback erratic with throws and seldom comfortable in the pocket.

Yet when he had to make significant plays, he did - with Rothlisberger setting up Pittsburgh's second field goal on a 28-yard pass late in the third quarter when he escaped a blitzing Haruki Nakamura.

"Did the foot bother you?" he was asked.

"It hurt a lot," Roethlisberger said, "but that broken nose took some of the pain away."

Ah, yes, the broken nose. Roethlisberger suffered that injury when he was struck in the face by defensive tackle Haloti Ngata on the Steelers' first series. He played on, never missing a snap, and played well enough to make the plays that mattered down the stretch - which, of course, is his style.

Only this time things were a little more complicated in that he lost tight end Heath Miller to a concussion and right tackle Flozell Adams to a high ankle sprain. So Roethlisberger had to elevate his game, and he did on the game-winning touchdown.

Reading the coverage, Roethlisberger knew he had to make a quick throw to beat the Baltimore rush and chose Redman as his target, with the running back cutting over the middle from left to right. The throw was perfect, Redman broke two tackles, and the rest you know.

"That's Ben," winning coach Mike Tomlin said. "We expect that from him. Not that it's unappreciated, but we expect it from him, and he expects it from himself."

Which is why you should expect the Steelers to be a factor in the playoffs. I know, they have a slew of injuries, but tell me who doesn't this time of year. The Jets just lost starting safety Jim Leonhard. The Patriots just lost offensive lineman Stephen Neal. The Chargers and Colts play on despite a raft of injuries. I think you get the idea. You play on, and hope for the best - and as long as Roethlisberger's in the lineup, the Steelers usually get it.

"Ben's a warrior," Ward said. "He's a winner. He gives us a great chance to win every time. I love the way he plays. We really had a lot of injuries out there tonight, and we just hung in there."

But that's the mantra for the Steelers' season. They squeeze by Buffalo in a game they should lose. They squeeze by Baltimore in a game they could lose. And now they're on top of their division, waiting for the Jets or Patriots to fall to them at 9-3 on Monday night. Life is good when you're the Steelers and Ben Roethlisberger is in the lineup - no matter what his condition.

And another reason to like the Steelers.
By CBSSports.com Senior Writer Clark Judge