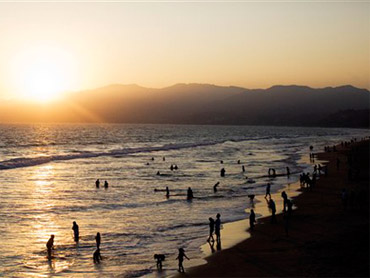 Just when you thought it was safe to get back in the water.

Having helped drive that pesky Great White shark to the brink of extinction, you'd think the U.S. could finally relax, slather on sunscreen and plunge beneath cool salty waves.

But according to a recent report you may want to rethink that family vacation on the shore. A new, sinister and potentially fatal threat lurks on some of our favorite beaches, just waiting for us to wade into the surf so it can attack us. Once again, coastal Sheriffs face the wrath of chambers of commerce by closing down popular beaches during the hottest days, threatening seasonal tourist-dependent economies. What is this, Jaws VIII?

Not exactly. In Peter Benchley's novel and Steven Spielberg's blockbuster, the enemy was a prehistoric killing machine. Today's threat comes from the excesses of you and me. And rather than lose arms and legs rows of jagged teeth, our immune system risks being eaten from within.

Untreated dirty stormwater runoff and sewage overflows continue to pollute the beaches of the United States, sickening swimmers with a range of waterborne illnesses from ear infections and dysentery to hepatitis, respiratory ailments and neurological disorders. For kids and elderly, the results can be fatal.

"Americans should not suffer the consequences of contaminated beachwater," argued Nancy Stoner, Water Program Co-Director for the Natural Resources Defense Council. NRDC urges more spending and crackdowns under two Acts pending in Congress, including one to tackle climate change, which escalates the risk. "From contracting the flu or pink eye, to jeopardizing millions of jobs and billions of dollars that rely on clean coasts, there are serious costs to inaction."

The costs are indeed real, and government should act, but for me the most troubling word in that statement was the first.

Apparently Ms. Stoner, an otherwise concerned citizen of the world, has come to accept a certain level of inequality as natural and inevitable. Sure, coastal-dwelling Bangladeshis and Mozambicans, Mexicans and Indonesians should suffer the consequences of contaminated beach water, just as they suffer the consequences of contaminated air. But red-blooded Americans having to modify their leisure habits? By god, that's an outrage!

Hoping to ease the pain, NRDC provides a rating system. It identifies the best five-star beaches (from Alabama's Gulf Shores to California's Newport to New Hampshires' Hampton), and the worst one-star beaches, from Florida's Venice to New Jersey's Central. But that name-and-shame approach only reinforces the reality that upscale beaches get cleaner while middle and lower income swimmers get sicker.

Yes, yes, I know. Talk of such inequity brings accusations of fomenting "class warfare." But it merely belabors the obvious that, whether the case is greenhouse gas or polluted water, the emissions of the affluent keep falling on the backs of the poor.

So how about this for a radically egalitarian approach: a national cap and trade program for household emissions.

Don't worry. This doesn't mean a plug on our individual bowels or bladders; we are, after all, natural born excretory machines. Nor does it mean carrying bags of human poop like dog owners have to do, in search of someone with whom to exchange.

What it would cap is how much greywater (sinks and showers) and blackwater (from toilets) leaves our private homes to become a public risk. And what it would trade is the unused credits.

Its principle boils down to the all-American: "Listen pal, you take care of your stuff, I'll look after mine." In practice it means wastewater utilities grant every family - superrich or dirt poor - the same equal share of emission. Then, if you release less, you can earn more, save and sell that "unused household sewage credit" to the city, or to your neighbor.

Such a voluntary system would reward the resourceful and punish only the careless. It would trigger a race to turn urine and feces and soapy water into nutrient rich compost and fertilizer and garden irrigation. And it would ease the strain on all species that depend on healthy ecosystems, from crustaceans and bottom feeders to fish and Homo sapiens.

Who knows, such private incentives may even clean up our public shores enough to one day welcome back that benign sign of coastal health, the Great White Shark.
By James Workman