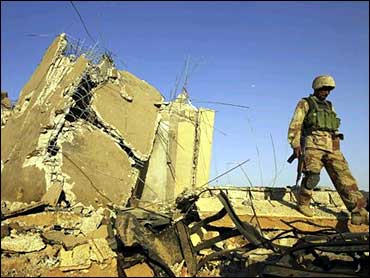 On a hill overlooking Iraq in the bleak Syrian desert, government officials on Monday pointed out new security measures including taller sand berms that they've taken to keep foreign fighters from crossing into Iraq.

But Western diplomats say Syria still could do more. And, the diplomats added, the Syrians need both better intelligence and better night-vision equipment to keep insurgents from infiltrating into Iraq after dark.

The Syrian authorities gave journalists the rare tour of border areas Monday to highlight improvements in security measures as U.S. forces on the other side waged the latest offensives against insurgents believed to have entered from Syria.

Damascus is under intense pressure from Washington and Baghdad to tighten control of its porous border.

A giant picture of President Bashar Assad looked over the bleak desert landscape as several hundred trucks waited to cross into Iraq at Tanaf, one of the main posts along the 360-mile frontier with Iraq.

On a hill nearby overlooking Iraq, a Syrian border officer pointed to the tall sand barrier that runs along the border, saying the government has increased the height of such berms to 12 feet as a measure against infiltrators and smugglers.

The officer, who would not give his name because of the sensitivity of the border issue, said the Syrian government has deployed 7,000 troops along the border.

The journalists, who were driven for 120 miles along the berm north from Tanaf, could see small outposts set along the way, each staffed with about a half-dozen Syrian solders who snapped to attention and saluted as the trucks drove by.

There is an outpost every 400 meters or 3 kilometers, depending on how sensitive the area is, said the officer and about 540 outposts altogether.

The government also has filled up desert storm water valleys, or wadis, with cement blocks and barbed wire to prevent smugglers and infiltrators, the officer said. During the day, there are patrols and at night, they set ambushes for infiltrators, he said.

But the region shown to journalists was not the most vulnerable to insurgent crossings, said Col. Julian Lyne-Pirkis, a defense attache from the British Embassy in Damascus who has surveyed the entire length of the border.

More insurgents cross further to the northwest, at the border town of Abu Kamal, across from the Iraqi town of Qaim, where they can move among the people without drawing suspicion, said Lyne-Pirkis, who accompanied Monday's trip.

The Syrians did increase their work along the border starting nine months ago, he said, nevertheless, the border remains "very difficult" to control especially at night.

"They are making progress, but they can still do more on the border to improve it," he said.

He said security measures remained "fairly basic," relying on Syrian troops who have "mostly just their eyes to survey the border, and that is not enough."

The Syrians have asked the British for night-vision equipment, and British officials have promised 700 pieces, Lyne-Pirkis said. But he said the deal was awaiting approval at a higher level in the government.

Such equipment is expensive, and would be difficult for Syria to obtain because of restrictions on the types of military equipment that western countries will sell to Syria.

The Syrians also need to improve patrols and get better intelligence to understand how the insurgency works, Lyne-Pirkis said.

Another Syrian border official acknowledged that it is difficult to keep insurgents from crossing at night, although he said such crossings are generally prevented during the day.

That official, who also spoke on condition of anonymity because of the sensitivity of the border issue, said 15 border guards had been killed either by outlaws crossing the border or by fire from U.S. troops who apparently mistook the Syrians for infiltrators. He did not provide more details.

On the Iraqi side, some 1,000 U.S. and Iraqi troops are carrying out two military campaigns, code-named Spear and Dagger, aimed at destroying militant networks near the Syrian border and north of Baghdad. About 60 insurgents have been killed and 100 captured since the campaigns began at the end of last week.