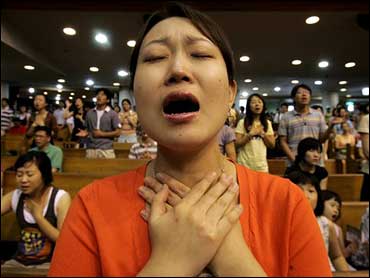 "It's a grave violation of human dignity," the pope said, speaking from Castel Gandolfo, a papal retreat on the hills south of Rome.

"I issue my appeal so that the perpetrators of such criminal acts desist from the evil they have carried out and give back their victims unharmed," the pope said during his traditional Sunday prayer.

Afghan President Hamid Karzai said Sunday the kidnapping of 22 South Koreans by Taliban militants was shameful and that abducting women in particular was against Islam.

In his first comments on the crisis since the South Koreans were taken hostage on July 19, Karzai criticized the kidnapping of "foreign guests," especially women, as un-Islamic and against Afghan culture.

"This will have a shameful effect on the dignity of the Afghan people," Karzai said, according to a statement from the presidential palace released after talks with a South Korean delegation.

Afghan officials, meanwhile, reported no progress in talks with tribal elders to secure the release of the hostages.

Two days of meetings between elders of Qarabagh district in Ghazni province, where the South Korean hostages were kidnapped on July 19, and a delegation of senior officials from Kabul, yielded no results so far, said Shirin Mangal, spokesman for the Ghazni provincial governor.

"So far there is no progress from the meetings," Mangal said.

The meeting is being held behind closed doors, and Mangal did not divulge any details.

A purported Taliban spokesman, Qari Yousef Ahmadi, complained Saturday that the Afghan delegation "doesn't have the power to release prisoners" — the key Taliban demand from the outset of the hostage crisis.

He said the Taliban wanted the hostages "to go home safe," but they first wanted 23 Taliban militants released from Afghan prisons.

A leader of the South Korean group, which was kidnapped while traveling by bus on the Kabul-Kandahar highway, Afghanistan's main thoroughfare, was shot and killed last week. The 22 other hostages, including 18 women, remain captive.

Afghan officials have said they are optimistic the hostages will be freed without further bloodshed, although the kidnappers have threatened to kill their captives if their demands are not met.

Ahmadi said the militants hoped the South Korean envoy can "persuade the Afghan government" to swap imprisoned militants for the captives.

"If they don't release the Taliban prisoners, then the Taliban does not have any option other than to kill the Korean hostages," he said, reiterating an earlier threat.

Local tribal elders and clerics from Qarabagh have been conducting negotiations by telephone with the captors for several days.

Ahmadi said the hostages were being held in small groups in different locations and that some of them were in poor health.