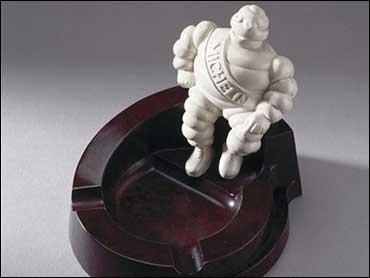 Strap on your PVC boots; hike up your nylon stockings. It's time to celebrate the 100th birthday of the world's first entirely synthetic material, one that revolutionized manufacturing, transportation, fashion, and more.

An exhibition opening Wednesday at London's Science Museum looks to a future that includes plastic blood and airplanes that can shift shapes in mid-flight.

2"It's gone from one little sample of brown material in a man's hand to just being everywhere," said Alison Conboy, who helped put the exhibit together. "It's hard to imagine a house that doesn't have them."

Belgian-American chemist Leo Baekeland created his phenol-formaldehyde polymer resin – later named Bakelite -- in 1907. Although scientists had long tinkered with plastic-like materials such as vulcanized rubber, his was the first fully synthetic material ever made.

Electrically resistant, chemically stable, heat-resistant, shatter-, crack- and salt-proof, the material was an enormous success. Soon Baekeland's New Jersey factory was cranking it out for use in billiard balls, switchboards, tabletops, counters, gears and washing machines.

Some of the new products touched off consumer hysteria. Touted by DuPont Co. in 1939 as "smooth as silk, strong as steel," nylons sparked melees as women mobbed department stores to replace their old stockings.

"Plastics" was the one-word piece of career advice offered to Dustin Hoffman's character in the 1967 film, "The Graduate." Perhaps more memorable was Anne Bancroft's nylon-clad leg.

The guiding principle behind nylon's success – that an expensive organic material could be replaced with a stronger, cheaper synthetic one – was repeated throughout the century.

Plastic bottles, Styrofoam cups, Teflon-coated frying pans, Tupperware containers, Formica counters and plastic wrap invaded the kitchen, while men and women all over the world shed their silk and cotton for acrylic and polyester.

Members of the plastic family have a dizzying diversity of uses.
PVC can be part of a doorframe or a piece of insulation, but it also is cut into credit cards, turntable records, upholstery, or high-heeled PVC boots such as the ones worn by Julia Roberts in "Pretty Woman."

Plastic is already all around us, and someday it might float through our veins. "The nature of plastic is such that you can create a molecule that's very similar to hemoglobin, the cells that carry oxygen," Conboy said. Beyond being more painless to obtain, the material can be carried and stored more easily than its bright red counterpart.

Silicon might be more closely associated with the computer age, but that could soon change as circuits are printed directly onto plastic chips.

The flexible circuitry could be used for foldable displays such as electronic pages that can be stuffed into a pocket, solar panels that can be draped over tents, or even electronic clothes.

Although planes are no strangers to plastic -- some are made of nothing else -- the next generation of plastics could fly them into the science fiction age. Shape memory polymers change shape as they are heated, meaning theoretically they could be used to build planes whose wings shorten or lengthen in mid-flight.

Ninety percent of plastics are now made from oil, a product with an uncertain future, Conboy said. The same resilience that made the material ideal has also meant its environmental consequences last and last -- potentially forever.

Less than 10 percent of all plastic is recycled, and the Worldwatch Institute, an environmental research agency, estimates that 100 billion plastic bags are discarded each year in the United States alone.

Although plastic made its debut as a replacement for expensive organic materials, bioplastics made from plant matter might eventually replace environmentally unfriendly ones, Conboy said.

Conboy pointed to one of the museum's exhibits, the Toyota Motor
Corp.'s I-unit, an electric car built almost entirely of material derived from corn, sugar cane, and the African kenaf plant.

"(Plastic) has changed so much in the past 100 years," she said. "Who knows what it will bring in the next century."