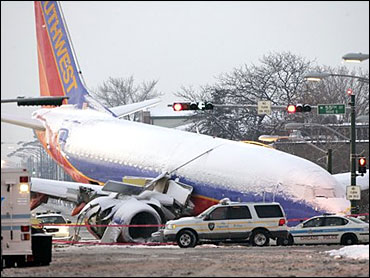 A jetliner trying to land in heavy snow slid off a runway, crashed through a boundary fence and slid into a busy street, hitting one vehicle and pinning another beneath it Thursday. A child in one of the vehicles was killed.

Two passengers on the plane suffered minor injuries, and eight people in the two vehicles outside Midway International Airport were hurt in the incident, authorities said. Five people were in one vehicle, four in the other.

The Boeing 737 crashed through a noise wall and slid onto Central Avenue, hitting the two cars, reports Chelsea Irving of CBS station WBBM-TV. The 6-year-old boy killed was a passenger in one of those cars.

The child was dead on arrival at the hospital, spokeswoman Deborah Song said. Two adults and two other children were at the hospital, their conditions ranging from serious to good, she said.

A nursing supervisor at another hospital said an 8-year-old girl was being treated there late Thursday night.

Check out local coverage of the accident at WBBM Newsradio 780's Website.
Ninety-eight passengers and five crew members were on board Southwest Airlines Flight 1248.

Passenger Mike Abate, 35, of suburban Milwaukee said after the landing he saw a father carrying an injured child and other people being taken away in an ambulance.

According to the Federal Aviation Administration, Southwest Airlines Flight 1248 from Baltimore to Chicago slid off the runway about 7:15 p.m. at the northwest corner of the airport, through the boundary fence and into the roadway.

The airplane's nose was crushed and a severely damaged engine was on the ground, Chicago Fire Department spokesman Larry Langford said.

"The wheels touched down and it seemed pretty much like a normal landing," Vazzano told CBS News The Early Show co-anchor Hannah Storm. "But after five or ten seconds, you realized you weren't slowing down. I was sitting by the window, saw the snow on the runway, and became a little concerned. Then we started hitting the bumps. And I guess that's where we ran off the runway."

He said some passengers used inflatable slides to get out of the plane in the blowing snow, while others exited from stairs at the rear of the plane.

The passengers were held for questioning by investigators and first responders for about three hours, Vazzano said.

At a news conference in Dallas, Southwest CEO Gary Kelly said the jetliner's captain had been flying for about a decade and the first officer had about 2½ years' experience. He did not name them.

Southwest flies an all-737 fleet with more than 400 aircraft.

The plane circled Midway for about half an hour because of the weather and traffic before it was cleared for landing, Kelly said.

"There are no indications that there are any maintenance problems with that aircraft whatsoever," Kelly said, adding that the plane had a service check in Phoenix on Wednesday.

National Transportation Safety Board and FAA officials from Washington were en route to Chicago to investigate.

"When you're looking at a runway overrun, it almost always involves a runway condition that's improper," Burnett told WFLD-TV. "But that's not the only thing."

Midway reported 7 inches of snow Thursday, but Abrams said runway conditions at the time were acceptable.

The airport, Chicago's second largest, is closely bordered by streets lined with homes and businesses. Midway serves more than 17 million travelers a year, many of them on Southwest.

The accident occurred 33 years to the day after a crash at Midway that killed 45 people, two of them on the ground.

In that crash, the pilot of United Airlines Flight 533 was instructed by the control tower to execute a "missed approach" pattern. The pilot applied full power to go around for another landing attempt.

A little more than a mile from the airport, the airliner struck tree branches, then hit the roofs of a number of neighborhood bungalows before plowing into a home, bursting into flames. Eighteen passengers survived.

Meanwhile, a National Weather Service forecaster says the East Coast now faces "quite a doozy of a snowstorm," as the system that dumped up to 10 inches of snow from Texas to Indiana rolled east. Forecasters say that storm is joining forces with another one off the Virginia coast Friday. They say the augmented storm will slide up the East Coast and could pelt New England with up to a foot of snow.

New Jersey, New York and parts of Pennsylvania could get several inches of snow. Forecasters predict mostly rain and sleet in Virginia and Maryland.

Slick roads in Kansas, Missouri, Kentucky and Indiana are blamed in at least 13 deaths.